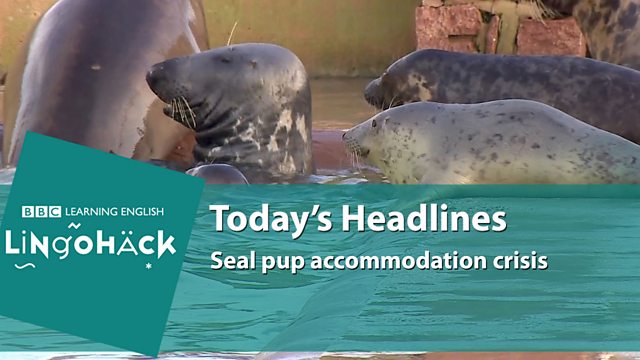 sanctuary – a place of safety

rehab – short for rehabilitation; the process of returning to good health

recuperate – to become well again after an illness or injury

Why is the situation so bad for the seal pups this winter?

On a suburban estate… a pop-up seal sanctuary.

With the local rescue centres full, these orphaned pups are having to be housed in a garage near St Ives (UK). Father and son, David and Dan, are fully trained and caring for the seals 24-7.

Dan Jarvis, British Divers Marine Life Rescue
“We are at the point where we really are (struggling). I mean, this sort of speaks for itself really, having all of these guys here. The rehab centres just don't have the space to handle this many pups in such a short amount of time.”

Every day, volunteers from the group are racing to the Cornish coast to rescue unprecedented numbers of sick and starving pups, orphaned and injured in the winter storms.

Providing emergency food is the easy bit. Finding them somewhere to recuperate is much more difficult. They've had nearly 300 call-outs already this winter.

So why are things so bad this winter?

Sue Sayer, Researcher, Cornwall Seal Group
“Because we've had a succession of storms over really high tides; (it’s) flooded all the beaches, washed all those seal pups out without enough food inside them to survive.”

Rescue teams all around the UK are reporting record numbers of seals needing help.

Once these pups have recovered, they'll be sent back into the sea.

Conservationists say if we're going to avoid an accommodation crisis next winter, we need to start planning now.

Why is the situation so bad for the seal pups this winter?

A succession of storms over really high tides has flooded all the beaches and washed out all the seal pups without enough food inside them to survive.

Like humans, seals take approximately nine months to gestate inside the womb. Once born, pups take up to six years to reach sexual maturity. Seals have an average lifespan of 25-30 years.