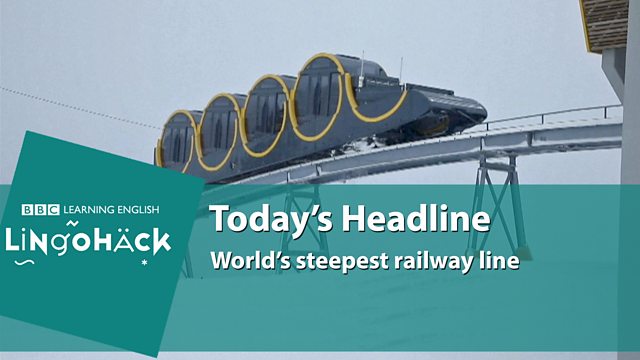 faint-hearted – not confident or brave

steep – rising or falling at a sharp angle

gradient – how steep a slope is

weak at the knees – feeling unsteady or weak due to shock, fright or attraction

Up here, 13 hundred metres above sea level, is not a view for the faint-hearted, and transporting people up this steep Swiss mountainside is not without its challenges.

Two years behind schedule, it's taken 14 years of building and with a price tag of 53 million dollars.

But the Swiss are convinced the new funicular on the world's steepest line is worth it.

Reinhold Boiger, Engineer
To construct a tunnel with a 110% gradient has rarely been done before.  All the workers have to secure themselves. Sometimes they have to work hanging in the ropes. We have to be very careful with the material. If you drop something, it falls all the way down, and what's even more dangerous - if you drop something, it can fall on the head of a worker further below.

If the breathtaking climb itself doesn't leave you weak at the knees,then standing upright in the carriages shouldn't be a problem either.

They've been uniquely designed to allow the floors to adjust with the gradient as it travels.

Each of the carriages can carry 34 people, at a speed of ten metres per second, meaning the climb or descent lasts no longer than four minutes.

The line replaces an old funicular that had been operating between the valley town of Schwyz to the mountain village of Stoos since 1933.

The new space-age looking carriages have been hailed an engineering success. It remains to be seen whether it will help take the area's tourism to new heights.

They had to secure themselves and sometimes work hanging in the ropes. They also had to be careful with material. If it dropped, it could have injured a worker below.

The name 'funicular' is derived from the Latin word funis, which translates as 'rope'. Funiculars use ropes or chains and operate on a counterbalancing system. The weight of the one at the top pulls against the one at the bottom, making it move.