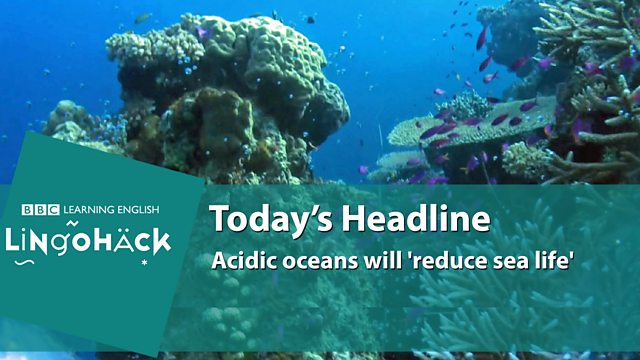 creatures – living organisms, but not plants

ecology– relationship between living beings and their environment

species – a group of organisms with similar characteristics

food web – relationship between living beings as they eat each other

Here is the effect of carbon dioxide on sea water. These bubbles contain natural CO2 from an underwater volcano in Papua New Guinea. Few sea creatures can live here because the CO2 has made nearby water more acidic. Swim away from those vents, and what a difference.

The sea's chemistry returns to normal. And wonderful reef life can thrive. But industrial society is churning out CO2 on a massive scale. And the gas is being absorbed into seawater round the world, making it all more acidic.

Dr SIMON BOXALL, Oceanographer
This comprehensive study confirms what we have been observing globally. Ocean suffocation is a problem. Acidity is increasing, and that's not just having an impact on the ecology which we're seeing already. But it will have an impact on us as humans further down the line.

Take one fish we love to eat, cod. The research shows that baby cod are especially sensitive to more acidic water. It projects that if CO2 levels rise unchecked, we should expect only a quarter as many cod in the seas. Some species will thrive with the changes, the scientists say, like some seaweeds. But the report warns that all sea life will be affected by the disruption of the food web in the seas.

According to this research, if CO2 levels rise unchecked, we should expect only a quarter as many cod in the seas.

Around 70% of the Earth’s surface is covered by oceans. Despite this, it is estimated that 95% of the world’s oceans and 99% of the ocean floor are unexplored. This is due to the difficulty, time and cost needed to do so.