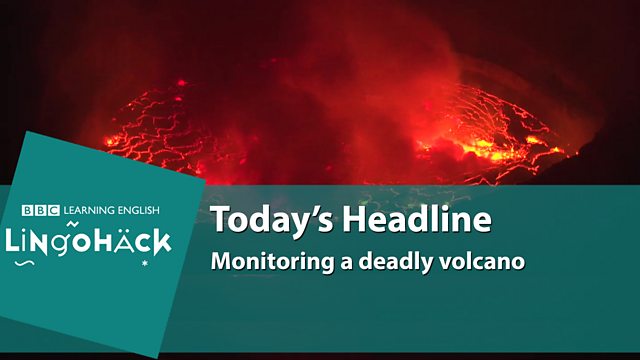 towers above – stands much taller than (something)

active – a volcano that is capable of erupting

peak – the top of a mountain or volcano

eruption – a violent discharge of ashes, smoke and lava

Shrouded in mystery. It towers above eastern Congo. The Nyiragongo volcano is one of the most active and feared in the world. Smoke and clouds mingle at its peak hiding the threat within.

At nearly 3,500 metres above sea level, this volcano is difficult to access and predict. From the city of Goma below, a group of Congolese scientists keep a close watch looking for signs of danger.

Their warnings were ignored in 2002 when an eruption destroyed parts of the city. Ninety thousand people lost their homes and dozens of residents died. But today, some of the houses are built around the solidified lava and the local population is much more aware of the risks.

For now, there are no warning signs. And it's not just scientists summiting the volcano. Tourists are joining them. It takes seven hours of hard trekking to reach the top. But it's well worth the effort.

Set in the Unesco world heritage site of Virunga National Park, the Nyiragongo and its magnificent lava lake are attracting visitors from across the world. And with that, Goma's biggest natural threat is giving back to the community living below.

Ninety thousand people living around the city of Goma lost their homes and dozens of residents died.

Volcanoes (or volcanos) can change the weather. They can cause rain, thunder and lightning. Volcanoes can also have long-term effects on the climate, making the world cooler.