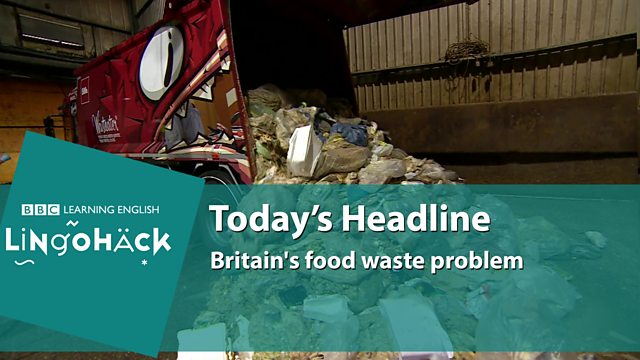 discarded – (verb) thrown away because it's no longer wanted

overproduction – (noun) making more of something than is needed

surplus – (noun) more of something than is needed

OK, it's past its sell-by date, but this is – or was – food. Grown, produced, processed and discarded; a super-size serving of stinking waste.

Paul Killoughery, Managing Director, Bio Collectors
“It's amazing how much food is thrown out, and it's amazing how long it's taken the message to get through. If you don't have to eat it, don't buy it.”

Overproduction is a fact of the modern food industry. Most of the surplus - good nutritious stuff - goes to waste. But here, there’s another way. At the FareShare charity they take the surplus and use it to feed the hungry.

Which is good news here at the Melton Learning Hub, where disadvantaged kids get good fresh food.

Sarah Cox, Manager, Melton Learning Hub
“Just for our kids, it means they get a hot meal… they definitely get a hot meal every day. Lots of different circumstances the young people come to us in and this is a brilliant way of using food that would, as you say, go to waste.”

Tackling the issue will mean dumping less food and doing more with whatever goes in the bin. Here it’s used to make valuable fertiliser to generate gas and electricity.

But most of our discarded food still goes to the incinerator or to landfill - perhaps the definition of waste in a hungry world.

Wasted food has been used to feed the hungry and also changed into fertiliser to generate gas and electricity.

‘Sell-by’ dates are aimed at the shopkeepers rather than shoppers. They indicate how long the food should remain on sale. A ‘use-by’ date is a really important one to take note of -after this date, the food may not be safe to eat.
(Source: http://www.bbc.co.uk/programmes/articles/2V5HNS9srK9bXpLyhxLg8Lx/is-it-safe-to-eat-food-past-its-sell-by-date)