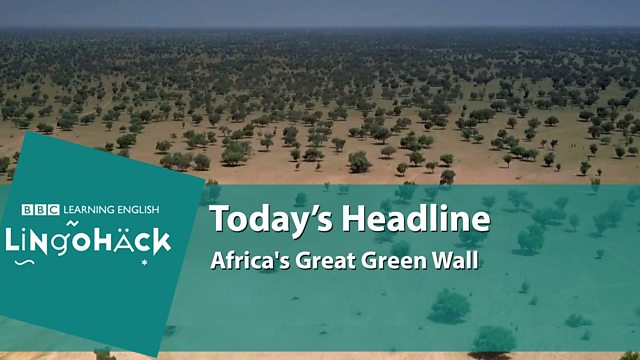 desertification – (noun) process where land becomes too dry for farming

humidity – (noun) moisture in the air

drought-resistant – (adjective) not effected by long periods of no rain

Africa is building a giant wall - of trees. It stretches across the entire continent, in a bid to help fight the effects of climate change. It's called the Great Green Wall - but can it work?

The wall spans 11 countries - measuring 8,000 kilometres long and 15 kilometres wide. So far, Senegal has made the best progress by planting 11 million trees.

This village chief says the Green Wall is reversing desertification.

Absaman Moudouba - Village Chief
When there were no trees, the wind used to dig up and erode the soil but it is more protected now. The leaves provide compost and the canopy increases the humidity of the environment and offers some shade so there is less need for a lot of watering.

The project is planting drought-resistant acacia trees. The tree roots hold the water in the soil so formerly dry wells have filled up again.

Absaman Moudouba - Village Chief
Before, there was widespread drought and hunger here.  Then the tree planting took place and then a garden for the women to grow crops. Before people used to migrate but nowadays they just follow the line of the Great Green Wall for jobs. They no longer leave.

The project, which began in 2007, is expected to cost a total of eight billion dollars. The Green Wall is still years from completion, but the World Bank, the United Nations, the African Union and the UK Botanical Gardens have all pledged money to continue planting.

Acacia trees are being planted because they are drought resistant.

Acacias are shrubs and trees found in warm and tropical regions. Belonging to the pea family, acacias have pods, and acacia beans are on the menu in Mexico.