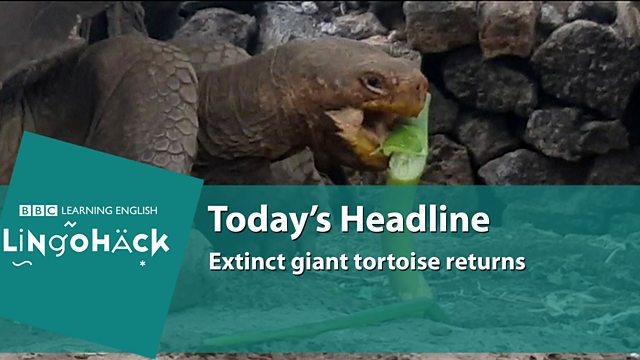 a comeback – a return

brought back from the dead – stopped being extinct

Who were responsible for making the Floreana tortoises become extinct?

Nothing happens too quickly in the tortoise world but this is a comeback worth the wait. The Floreana tortoise, once thought wiped out, has been on the extinction list for a century and a half. Now, with careful conservation, the species is being brought back from the dead.

The species became extinct from its home island of Floreana during the mid-nineteenth century after hunting and exploitation from the first settlers. Some Floreana were dropped on other islands breeding with other tortoises.

But now the original species is slowly and steadily staging its return. A breeding programme at the Galapagos National Park has yielded dozens of Floreana pure-bred tortoises, with hopes of thousands more in the coming years.

They'll be given time to grow into their shells within the national park. Then it’s hoped that in five years the Floreana will be released back into the wild to reclaim their island. But there's no rush!

Who were responsible for making the Floreana tortoises become extinct?

The first settlers were responsible for making the Floreana tortoises become extinct because they hunted and exploited them.

Made famous by British naturalist Charles Darwin's discoveries, Galapagos is a remote, biologically fascinating archipelago in the Pacific Ocean. They lie almost 1,000km off the coast of Ecuador, and it's this isolation that has caused many unique creatures to evolve.