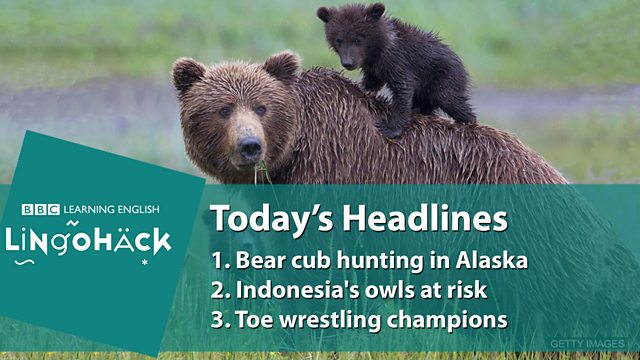 Alaska's wildlife refuges are immense. Each year, tens of thousands of people hunt here, but what rules should they follow? President Trump has lifted restrictions put in place by Barack Obama. Once again, all hunters can use bait and kill mother bears and their cubs. Animal rights campaigners are outraged, but many believe hunters are the best people to manage big game.

Hadie paid a 100 US dollars for this barred eagle-owl - the closest Indonesian owl that when young, looks like Harry Potter's snowy-white Hedwig. In the past people stayed away from them, believing them close to the spirit world. But now there's a growing number of people - inspired by fiction - to take wild owls as pets. There's only one type of owl that's on the protected species list in Indonesia. Activists want that changed to lift the Harry Potter curse.

New toe wrestling champions have been crowned after an unusual competition was held in Derbyshire in the UK. Participants at The World Toe Wrestling Championships, which is like arm wrestling but with feet, competed in best-of-three knockout rounds until a winner was found. Everyone had their feet checked by a podiatrist before they competed.

crowned
given the title for winning a competition

podiatrist
person who treats problems and diseases of people's feet


1. My football team have been ______ champions after an exciting win in the last game    of the season.

2. The artist says his new 'time machine' creation was ______, after reading an old novel.

3. Local residents are ______ about the decision to build a motorway near their village.

1. My football team have been crowned champions after an exciting win in the last game of the season.

2. The artist says his new 'time machine' creation was inspired by fiction, after reading an old novel.

3. Local residents are outraged about the decision to build a motorway near their village.

4. My podiatrist told me to change my socks to stop me getting athlete's foot again.