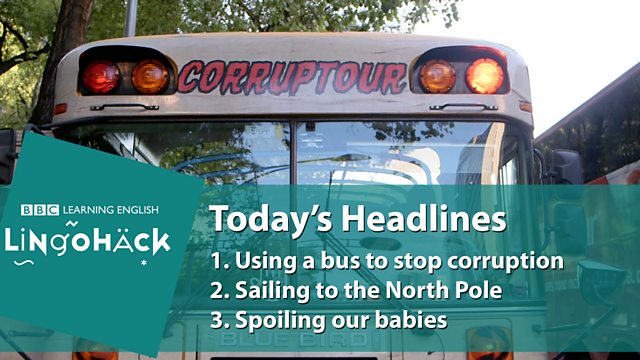 Using a bus to stop corruption

Sailing to the North Pole

Corruptour is a bus that goes around Mexico City highlighting the sites that have to do with the country's and also the city's corruption scandals. Experts say corruption costs five per cent of the country's GDP. Mexicans are angry after a series of high-profile scandals. And corruption doesn't just cost money, the impunity it creates costs lives. The tour volunteers want people to know that ending corruption starts at home.

Setting off into uncharted Arctic waters – a pair of yachts attempting a first, sailing all the way to the North Pole. A crew of ten and dog Fukimi have just departed from Alaska. Led by British explorer Pen Hadow, they have a 3,500 mile voyage ahead. It's the rapidly warming conditions in the Artctic that have made this expedition even possible. A large scale analysis from the US Polar Science Center estimates that from the late 1970s, half of the volume of sea ice has been lost.

Shopping for a baby isn't what it used to be. There's an explosion of choice. In America women are waiting longer to have children - by then they often have more disposable income. This year the global market for baby care products is expected to reach 66.8 billion dollars. Take every parent's desire to get the best for their kids… fuel it with the classic consumer desire to keep up with the Joneses, and big profits for the baby gear companies seem to be child's play.

uncharted
completely new; not seen on any map

keep up with the Joneses
do and buy things in order to appear as successful, rich or important as friends and neighbours

child's play
easy to do

impunity / uncharted / keep up with the Joneses / child's play

1. The band's new album takes them into ______ territory; it has a very different sound. 2. Once you've learnt English, learning another language will be ______.

3. Dave and Mary are obviously trying to ______; they've bought a new house with a swimming pool, just like their friends have.

4. The police are struggling to stop the criminal gangs who are terrorising the city with apparent ______.

1. The band's new album takes them into uncharted territory; it has a very different sound.

2. Once you've learnt English, learning another language will be child's play.

3. Dave and Mary are obviously trying to keep up with the Joneses; they've bought a new house with a swimming pool, just like their friends have.

4. The police are struggling to stop the criminal gangs who are terrorising the city with apparent impunity.