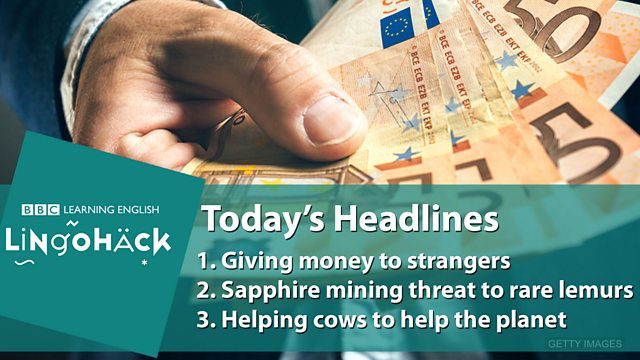 Helping cows to help the planet

When Noyi was born, neither of his parents were able to work. Three months later Noyi became the family's sole breadwinner, thanks to a radical experiment. Young Noyi is one of almost 100 randomly chosen people across Germany who've received an unconditional basic income of 1,000 euros a month for a year. Thousands are queuing up to be the next recipient and every few weeks one gets chosen by raffle.

In the forests of Madagascar there's a new sound - the sound of men working. Poor men who want to get rich. Once virgin rainforest, felled and burned. Now look - mine shafts and spoil heaps stretch across the valley. See the damage it causes, threatening the habitat of one of the world's rarest animals, the Indri lemur. They spend their lives in the trees eating leaves and fruit and breeding only once every three years. There may be as few as two thousand left in the wild.

Christine Musasua's farm only has five cows but it's part of a new battle against global warming because cows are a major contributor to climate change. By using a few simple techniques to change the way she farms, Christine has drastically cut her cows' methane emissions. The techniques have been taught by a Swedish development organisation. Christine used to get one or two litres of milk a day.  Now she's getting over five litres a day. As a result, Christine will need fewer cows and fewer cows means less methane.

breadwinner
person who earns the money that the family needs

habitat
natural environment in which an animal or plant usually lives

drastically
extremely; in a big way

1. The change to using electric vehicles will ______ cut air pollution in our cities.

2. A new report has found that mothers are increasingly the primary ______ in their families.

3. Wildlife experts say that access to flower-rich ______ from spring through to summer is key to the survival of successive generations of the bees.

1. The change to using electric vehicles will drastically cut air pollution in our cities.

2. A new report has found that mothers are increasingly the primary breadwinners in their families.

3. Wildlife experts say that access to flower-rich habitats from spring through to summer is key to the survival of successive generations of the bees.