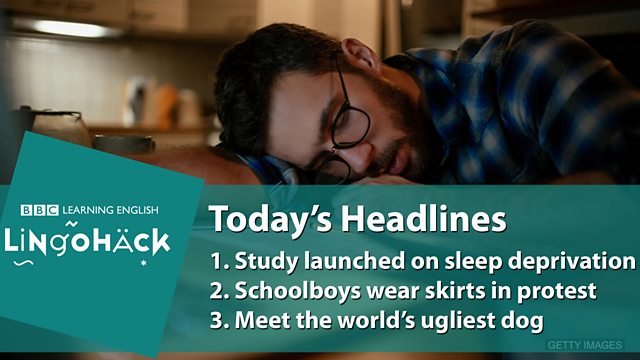 We spend nearly a third of our lives asleep. It's vital for our physical and mental health. But we’re getting less sleep than ever. British neuroscientist Adrian Owen based in Ontario, believes this may be having a serious effect on our brainpower. I joined volunteers at Western University, Ontario, trying out his online test designed to assess reasoning, memory and decision making. To demonstrate how tiredness may affect those, we stayed up until 4am and then had just four hours’ sleep. Most of our scores went down compared to the night before. After a normal night’s sleep my brain was functioning well. The bright orange blobs are areas of increased activity. And this is the scan done after four hours’ sleep. This study should reveal how much sleep we need for our brains to be at their best.

The uniform policy is strict at ISCA college and this protest took full advantage. When the boys complained about not being allowed to wear shorts in the recent heatwave, they were told - perhaps humorously – ‘wear regulation skirts instead’. Around thirty did. The skirts were borrowed from girls at ISCA. No one from ISCA Academy was available for interview. A statement said ‘shorts were not currently part of our uniform policy for boys and we would not wish to make any changes without consulting both students and their families. However, with hotter weather becoming more common, we would be happy to consider changes in future’.

This Neapolitan mastiff called Martha has been crowned the World's Ugliest Dog 2017 in California. Martha and her owner Shirley Zindler picked up the $1,500 prize. The big-jowled crowd-pleaser will now be flown to New York for media appearances. It’s the 29th year of the competition, which typically includes lots of dogs that have been rescued from shelters. The contest aims to raise awareness of the adoption of dogs. The animals are loving companions and seem to enjoy the adoration of the fans.

crowd-pleaser
someone or something that is very popular

2. Learning a second language can boost ______, scientists believe. The US researchers from Northwestern University say bilingualism is a form of brain training - a mental "work out" that fine-tunes the mind.

3. Brian was ______ known as the class clown because he was always pretending to faint whenever the teacher asked if he had done his homework.

1. The appearance of Beyoncé in the music festival was a real crowd-pleaser.

2. Learning a second language can boost brainpower, scientists believe. The US researchers from Northwestern University say bilingualism is a form of brain training - a mental "work out" that fine-tunes the mind.

3. Brian was humorously known as the class clown because he was always pretending to faint whenever the teacher asked if he had done his homework.