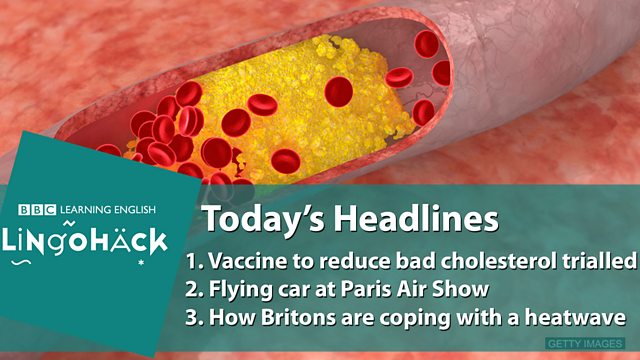 How Britons are coping with a heatwave

Heart disease and stroke are the world's biggest killers. Millions of people in Britain take cholesterol-lowering drugs to reduce their risk. Now scientists from the Netherlands Organisation of Applied Scientific Research believe they may have found an alternative treatment. It's a vaccine that helps the body's immune system get rid of bad cholesterol from the blood. The first human trials are now under way, but researchers say it will take six years before they know if the jab is safe and effective enough to get regulatory approval.

This is the flying car developed by Slovakian company, Aeromobil. It can fly to heights of up to 3,000 metres. It's a familiar concept, in the realms of science fiction, at least. But could the flying car become a reality? Could the traffic jams of your morning commute soon be a thing of the past? This model has been causing a buzz at this year's Paris Air Show. It's one of a number of flying cars being pioneered by manufacturers in different countries.

Whoever, whatever you are, today it was all about keeping cool, and at Bristol Zoo that meant feeding specially made ice lollies to the mammals. Homo sapiens need to take care in this heat, or perhaps just relax on the beach as temperatures reached 32 degrees – the hottest day of the year. Of course if your business is keeping people cool, these are good times. This ice cream manufacturer in West Somerset has taken on extra staff to cope with a huge increase in trade.

mammals
animals that feed their young on milk they produce

2. If you ate more vegetables you wouldn't catch colds so easily. They are supposed to boost your ______.

1. Singing gives me a real buzz.

2. If you ate more vegetables you wouldn't catch colds so easily. They are supposed to boost your immune system.

3. Do you want an example of mammals? Cows, dogs and cats!