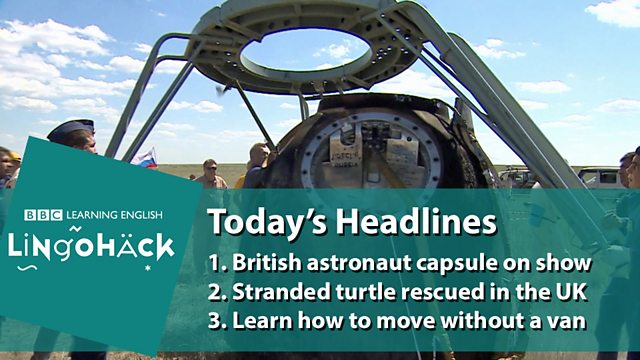 Stranded turtle rescued in the UK

Learn how to move without a van

Just over a year ago, Tim Peake set off for his mission to the International Space Station. Within weeks of being in orbit, he became the first British astronaut to walk in space. It was the stuff of scientific history. Now his capsule has been bought by Britain's Science Museum. The museum says it hopes that the display will inspire those that see it - especially children - many of whom might wish to follow in Tim Peake's footsteps.

An early morning start and another step on a journey that could eventually lead to this tropical sea turtle being released back into the wild. She was driven all the way from Anglesey, where she was found last November, to Hertfordshire. Six hours later and the team at the Royal Veterinary Hospital were preparing their unique patient. Getting a sea turtle into the scanning machine is no easy task, but experts need to check her lungs for damage. Olive ridleys can travel vast distances but it’s thought this one was carried by currents thousands of miles off course. Gel is being applied to prevent her skin from drying and she’s being kept warm ready for her journey back to Anglesey while experts decide her future.

How do you move all of the books in a library without transportation? Volunteers from the Belgian city of Ghent, show how to do it. About 1,200 of them formed a human chain to cover the 250 metres to a new building. Easy, see?

set off
started a journey

volunteers
people willing to do things for no payment

set off / the wild / volunteers

2. Vulnerable babies born addicted to painkillers are being soothed through their first difficult weeks by ______ whose sole task is simply to cuddle them.

1. There are only about 25,000 rhinos left in the wild, with the majority in South Africa.

2. Vulnerable babies born addicted to painkillers or heroin are being soothed through their first difficult weeks by volunteers whose sole task is simply to cuddle them.