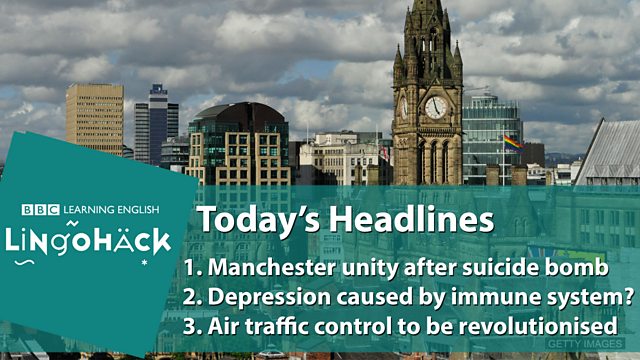 Could depression be caused by our immune system?

In a city so vibrant, after such an act of barbarism, the kindness of strangers is apparent everywhere. The taxi drivers who offered free lifts, the businesses providing food and drink for the emergency services. The sense that the city’s people are together, are united, is everywhere you look. Communities determined to stand together. As the messages and the floral tributes grow on the city’s streets, the grieving process is just beginning. But already the determination of Manchester’s people stands tall.

This team at King's College London are examining physical rather than mental causes for depression. In particular, they're looking at whether the immune system, which is designed to defend our bodies, can be a source of psychological harm. They're looking for bio-markers in patients' blood and saliva that show inflammation - a sign that the immune system is in overdrive.

This is London’s City Airport and that’s just one of the 300 or so take-offs and landings that happen here every day. And until now, all of those flights have been coordinated by a group of controllers who look out of these windows here. But in the future, those windows are going to be replaced by these high-definition TV screens – controllers won’t just see the airport they’ll be able to hear it as well. The thing is, this digital control tower is 120 miles away from the airport.

grieving
feeling very sad after someone has died

1. When Sally realised the exams would take place in two weeks, her efforts to study went into ______.

2. The board of directors paid tribute to Mr Jones. He had ______ the company's expansion overseas.

3. US actress Debbie Reynolds died ______ for daughter Carrie Fisher, who perished aged 60 the day before.

1. When Sally realised the exams would take place in two weeks, her efforts to study went into overdrive.

2. The board of directors paid tribute to Mr Jones. He had coordinated the company's expansion overseas.

3. US actress Debbie Reynolds died grieving for daughter Carrie Fisher, who perished aged 60 the day before.