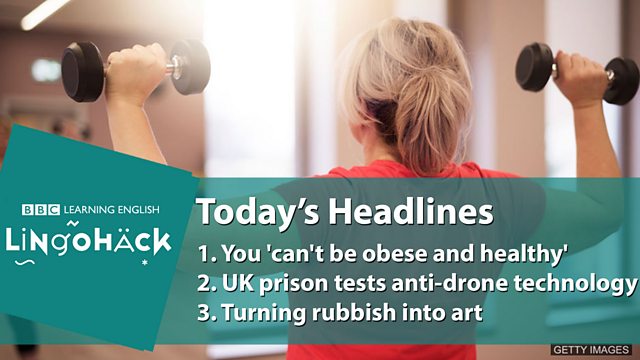 You can't be obese and healthy, says study

Previous studies have suggested that around a third of very overweight people are healthy – they have normal blood pressure and cholesterol levels despite being classed as obese, according to their body mass index, which is a measure of height versus weight. But a new analysis of the medical records of 3.5m UK residents suggests the idea of healthy obesity is a myth. Compared to those of a normal weight, it suggests even outwardly healthy obese people have a 49% greater risk of developing coronary heart disease.

This remarkable footage shows a drone being used to smuggle drugs into a UK prison. And here in Guernsey, prison chiefs are leading the way in tackling this aerial menace. You are about to see a drone stopped mid-flight. The system hacks the frequency of the drone, halts it and sends it back to where it came from. It's the first prison in the world to be using a drone-detecting fence, called 'Sky Fence'.

He has a knack for seeing treasure in a mountain of trash. Every week, Royd Bisiwasi goes to dump sites and restaurants to collect rubbish that would have otherwise landed up in landfills. He creates objects of beauty from waste and puts food on the table and provides a home for his family. The family makes art, toys, even furniture. This order of 200 giraffes is destined for the United States. It will net them about $600 - much higher than the average monthly salary here.

has a knack for
has a natural talent for

myth / smuggle / has a knack for

2. My mother used to tell me that you'll have indigestion if you go for a swim after a meal. I wonder if this is just a ______ and I'll be alright.

3. Police in Indonesia have arrested a man they suspect was ______ rare birds inside plastic bottles.

1. You should be a songwriter – you have a knack for composing moving ballads!

2. My mother used to tell me that you'll have indigestion if you go for a swim after a meal. I wonder if this is just a myth and I'll be alright.

3. Police in Indonesia have arrested a man they suspect was smuggling rare birds inside plastic bottles.