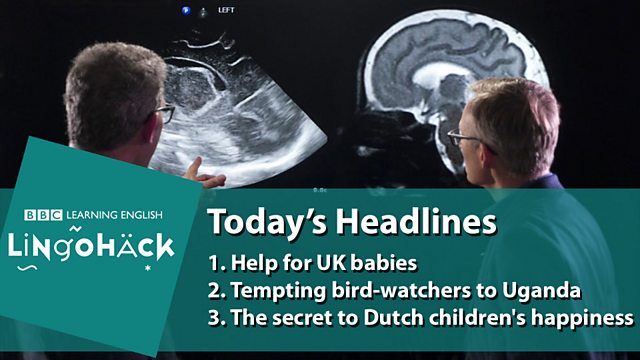 The secret to Dutch children's happiness

Ultrasound like this is how all premature babies are scanned - but it doesn't always reveal what's gone wrong. New-borns are usually too fragile to be moved, but at the Royal Hallamshire the purpose built baby MRI is just metres from the special care unit. On the left is an ultrasound scan, on the right an MRI scan. It's much more detailed and gives doctors more diagnostic information.

This is where you'll find some of the world's most beautiful and rare species of birds. Mabamba swamp on the shores of Lake Victoria, is gaining a reputation as a top bird-watching spot. Uganda has over one thousand species of birds - that's more than the United States and Europe combined. The question is how to make money from this resource. One way is getting more bird-watchers and tourists here. And the numbers are slowly growing. Uganda is trying to position itself as a wholesome and safe destination.

Children in the Netherlands consistently rank among the happiest in the world, according to surveys by UN children's fund, Unicef. Chocolate sprinkles clearly contradict the healthy eating advice. And yet, Dutch kids have some of the lowest obesity rates. This may be linked to the fact that so many cycle to school. Bikes and cars have separate lanes. And when they get to school, Dutch pupils don't face academic pressure - things like tests and homework - until much later. Could this be the secret for happiness? Well, a happy child could grow into a happy adult.

premature
before its due date

1. Dentists in Britain have said the habit of eating cake and biscuits at work is fuelling __________ and poor oral health.

2. Despite their __________ nature, fresh green leaves and salad foods are often involved in food poisoning.

1. Dentists in Britain have said the habit of eating cake and biscuits at work is fuelling obesity and poor oral health.

2. Despite their wholesome nature, fresh green leaves and salad foods are often involved in food poisoning.

3. More space to treat premature babies will be created at Wales' biggest hospital in a £7.5m modernisation plan.