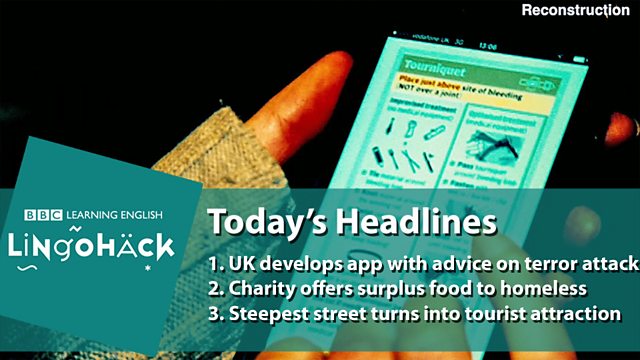 This isn't real – it's a mock-up of a moment of terror, a mass shooting with many victims. The security services in the UK say that, despite their best efforts, this could happen here. The official advice from counter-terrorism police is to run - hide if you can't run - and then tell the emergency services. The CitizenAID system goes a step further. It suggests people, once safe, should try to help others. The app explains how to prioritise those who are ill and how to stop severe bleeding.

A large spread of ingredients destined for the trash. This was all rescued by volunteers in London. Because of food handling laws, there's no meat. Nevertheless, it's transformed into free healthy meals and served to many living in social isolation and poverty.  FoodCycle is a charity with close to thirty hubs across the UK.  The UN estimates that roughly a third of all food produced for humans goes uneaten.

This New Zealand street is officially the world's steepest residential road. Baldwin Street in the city of Dunedin has an inclination of 35 degrees and has been attracting many visitors. It's irresistible for daredevils on bikes. It's also the stage for an annual charity event in which 30,000 chocolate balls are rolled down the road.

mock-up
a realistic model of something yet to be built

1. "Evel" Knievel was an American __________ famous for riding through fire walls, jumping over rattlesnakes, flying over Greyhound buses on his motorcycle.

3. The technology company released photos of __________ of the latest smartphone designs.

1. "Evel" Knievel was an American daredevil famous for riding through fire walls, jumping over rattlesnakes, flying over Greyhound buses on his motorcycle.

2. Social isolation is associated with a higher risk of death in older people.

3. The technology company released photos of mock-ups of the latest smartphone designs.