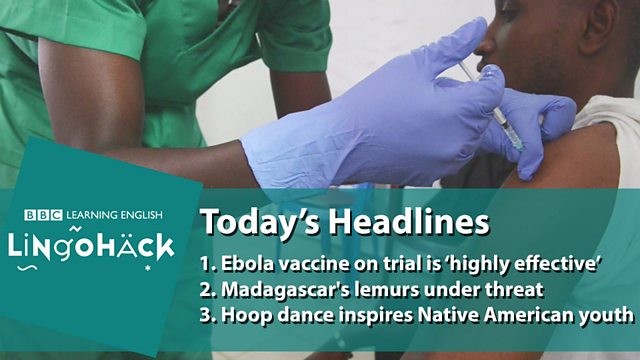 A major milestone in the fight against Ebola. Tests of an experimental vaccine in Guinea found the pioneering treatment to be up to 100% effective. Nearly 6,000 people received the vaccine; all were free of the virus 10 days later. Guinea was at the centre of the largest outbreak of Ebola in history. First identified at 2013, it swept through West Africa killing 70% of those infected and presenting the World Health Organisation with one of its biggest challenges. More than 11,000 people died and until now there was no known cure.

Madagascar is losing its wide-eyed wonderers – the lemurs – at an alarming rate. They are increasingly under threat from hunting and deforestation. Eighty percent of their habitat has been destroyed. Of the 50 kinds of lemur; 17 are endangered and 19 are vulnerable. The Nahanpoana Reserve in southern Madagascar has become a safe haven for the lemurs under threat. However, the money raised from the 3,000 tourists that visit every year here is barely enough to keep the sanctuary open. Without more help, lemurs could disappear from the wild in just a few decades.

In the interest of preserving culture and identity among Native Americans, Steve LaRance decided to start teaching a traditional hoop dance to young children. The artist lives in New Mexico. He started the Pueblo of Pojoaque Youth Hoop Dancers in 2013, at a time when he felt the younger generation was becoming too distracted by modern influences and technologies.

pioneering
doing something never done before

safe haven
a place of protection from threats

distracted
having the attention taken by something

1. Britain provided a __________ for refugees who left continental Europe during World War Two.

3. Marina's mother was annoyed with her. All that computer gaming was a __________ at a time when the girl should study for her exams.

2. The first heart transplant was performed in 1967. The pioneering surgery was carried out in a South African hospital.

3. Marina's mother was annoyed with her. All that computer gaming was a distraction at a time when the girl should study for her exams.