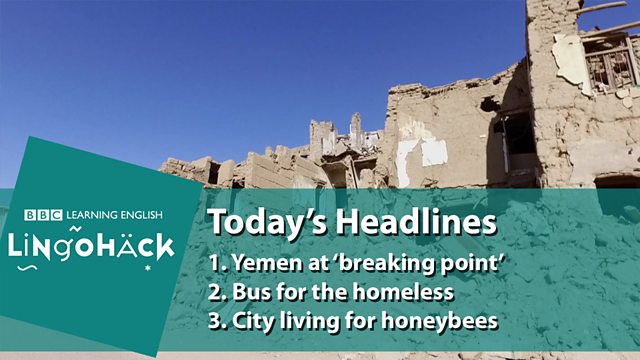 Bus for the homeless

Seeing first hand a testament of what one city has endured. This is where the conflict has been at its fiercest. Before the war 50,000 people lived here. In the last 18 months Saada has become a key battleground – the heart of the Houthi rebellion and the target of more airstrikes than any other Yemeni city.

All aboard for what could be a revolution in housing for the homeless. This is the double decker bus that's doubling up as accommodation. Paul has lived rough here on the Isle of Wight (UK) for months, but he's now one of 14 homeless people with a permanent berth on-board. Top deck the seats are out and the beds are in. Downstairs there are more beds, a fully-fitted kitchen, even a wood-burner.

With worldwide concern growing about the decline of bees, there's been a renewed interest in creating sanctuaries for these key pollinators to thrive. One of them is in the heart of the British capital. The University of London’s beekeeping project provides an urban oasis for honeybees while providing hands-on learning opportunities for its researchers. These rooftop hives in the heart of the city provide more than 10 kilos of honey a year - plus by-products - like beeswax.

a testament
evidence that something exists

lived rough
lived outside, often on the streets

urban oasis
a quiet place in a built up area

1. The figures are __________ to the improvements and investments that the business has made this year.

2. The islands are recognised as one of the most significant __________ for seabirds in the Atlantic.

4. After leaving prison, some ex-offenders were __________ for up to a year before finding suitable accommodation.

1. The figures are a testament to the improvements and investments that the business has made this year.

2. The islands are recognised as one of the most significant sanctuaries for seabirds in the Atlantic.

3. The plan for the new park is to create an urban oasis for visitors and shoppers in the city centre.

4. After leaving prison, some ex-offenders were living rough for up to a year before finding suitable accommodation.