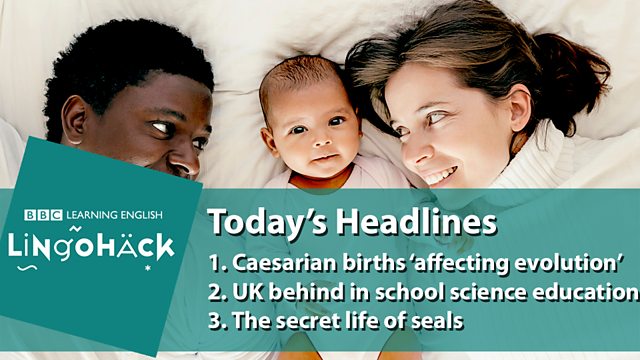 Today about one in four babies are born in hospital by caesarean section. Historically, women with very narrow pelvises would have died in labour and not pass these genes on to their daughters. The use of caesareans means their children have lived and there are more women with narrow pelvises. As a result there’s been a slight rise in the number of cases where babies are too big relative to their mothers to be born without surgery. Researchers say they are surprised that they’ve seen this effect in such a short time span in human evolution.

Simple science, but today a wider lesson for the UK: technology is changing the world but our schools aren’t keeping up with the best. Ministers around the UK say they need more time. For schools in England a shortage of science teachers - year on year not enough are starting training. And without enough teachers some fear we'll never catch up.

Above the waves their lives are well understood. But beneath, Britain’s grey seals are more of a mystery. They spend two-thirds of their time in the water but until now they’ve been little studied. If you want to study these incredible animals up close you do have to get into the water. Around the coast of the UK nearly 40% of the world’s grey seals live here and there are 5,000 of them here, in the Farne Islands. This is Ben Burville. He’s been diving with seals for decades. Now he’s capturing them on camera working with Newcastle University to record behaviour that surprisingly has never been seen before.

keeping up
progressing at the same rate as something else

up close
very near something

in labour / keeping up / up close

1. I would never go camping in the wild. I'm afraid of getting up close with a bear.

2. Regular contractions are a good indicator that a pregnant woman is in labour.

3. Why did you buy this expensive car? Are you trying to keep up with your rich neighbour?