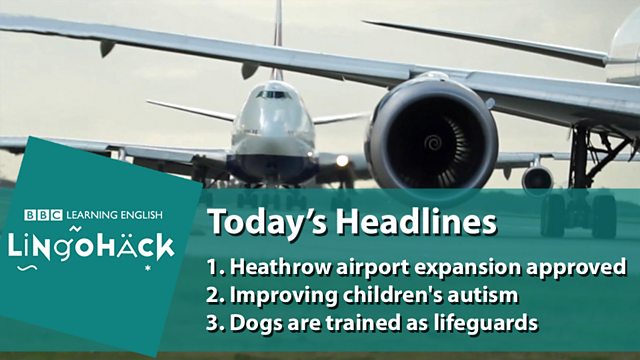 Dogs are trained as lifeguards

The British government has given the green light to the construction of a third runway at Heathrow. This will pave the way for hundreds of thousands more flights a year at the airport in west London. It's in a key position between America, Europe and the Far East but has lost its status as the world's largest hub airport to Dubai.

Scientists have found a treatment to boost communication in young autistic children which can significantly reduce the severity of their condition in later life. Giving mums and dads the skills to become "super parents" can dramatically improve their child's autism, according to a British-led study.

Yoda is one of the dogs being trained by the charity Newfound Friends, in the southwest of England, to save lives. They believe the animals can be good lifeguards. Whizz saved nine people from drowning during his life. But dog owners should not encourage their pets to do this job as it requires specialist knowledge.

given the green light
approved to proceed

given the green light / severity / charity

1. A public hospital has to prioritise cases and patients are seen according to the __________of their symptoms.

2. I love animals and contribute every month to a __________ which protects endangered turtles.

1. A public hospital has to prioritise cases and patients are seen according to the severity of their symptoms.

2. I love animals and contribute every month to a charity which protects endangered turtles.

3. The sales team were given the green light to offer massive discounts to customers.