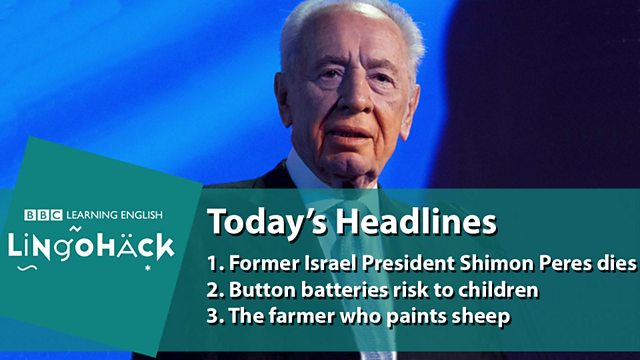 The farmer who paints sheep

Shimon Peres, the former president of Israel, has died at the age of 93. He was one of the defining figures of the Israeli state and played an essential role in forging a political deal with the Palestinians in the 1990s.

Doctors are warning about the dangers of those small round batteries that you find in watches, toys, greeting cards, and so many other things. The doctors have seen a rise in the number of children who’re suffering severe injuries after swallowing them accidentally.

A farmer in northern England has come up with a novel way to stop thieves stealing his sheep. Pip Simpson has decided to spray paint his entire flock bright orange. It's after 300 of his sheep were stolen over the past four years.

forging
creating (something) that lasts

injuries
occurrences of physical damage to a person

novel
(here as an adjective) original; not seen before

1. Samantha was involved in a car accident. Fortunately, her ________ were not serious.

3. The police are looking for ways to __________ good relations with the community. It makes their work easier.

1. Samantha was involved in a car accident. Fortunately, her injuries were not serious.

2. My son-in-law is always finding novel ways to make money but his inventions never work!

3. The police are looking for ways to forge good relations with the community. It makes their work easier.