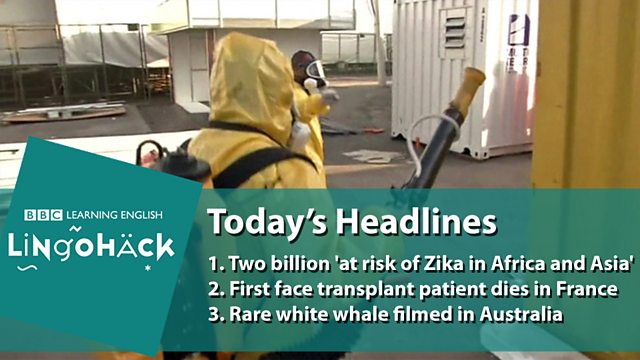 Two billion 'at risk of Zika in Africa and Asia'

More than 2.5 billion people around the world live in areas that may be vulnerable to outbreaks of Zika, according to a new study into the spread of the virus. Scientists say that countries in Africa and Asia are most at risk.

Doctors in France have revealed that the woman who had the world's first face transplant has died. Isabelle Dinoire passed away earlier this year from complications related to the surgery. The immunosuppressant drug she took to reduce the chances of tissue being rejected seemed to have made her more vulnerable to cancer.

Just before we go: this is rare, in fact an extremely rare whale. This drone footage showing the endangered Southern Right Whale which was spotted off the western coast of Australia. Only 5% are born white. I'll leave you with those pictures. See you soon.

1. Mary is very happy today. She __________ her favourite singer in the park and got an autograph. He looked like an ordinary jogger.

1. Mary is very happy today. She spotted her favourite singer in the park and got an autograph. He looked like an ordinary jogger.

2. There's been an outbreak of flu. You should have a flu jab as soon as possible.

3. My mother passed away in her sleep this morning. She's been ill for a while. At least her suffering is over.