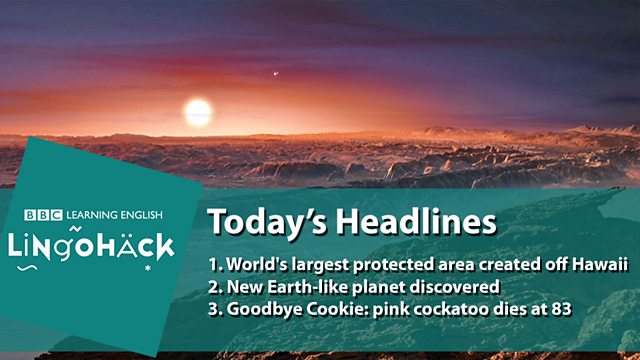 The US President, Barack Obama, has announced plans to dramatically expand a marine reserve off the coast of Hawaii. The world heritage listed site, which encompasses the Northwestern Hawaiian Islands, is home to many rare and endangered sea creatures. The expansion will effectively quadruple the size of the reserve; bringing it to around 1.5m sq km.

Some exciting news now, because scientists say they've found a planet orbiting the closest star outside our solar system. And they say Proxima b, which is about four light years away, is a rocky globe that could have enough surface water to support life.

And finally, let's take you to a zoo in the American city of Chicago. Celebrations, but also a bit of mourning for a special cockatoo, who has died at the age of 83. Here's Cookie, a pink cockatoo, celebrating, in these pictures, his birthday back in June. He's believed to have been the oldest known bird of his kind. He arrived in the zoo in the 1930s. He retired a few years ago.

marine reserve
area of ocean protected by the law

mourning
sadness because someone has died

1. A national day of __________ was held in Italy on Saturday in remembrance of the victims of an earthquake.

2. The Galapagos Islands are well known for their __________. It houses some very unusual species.

1. A national day of mourning was held in Italy on Saturday in remembrance of the victims of an earthquake.

2. The Galapagos Islands are well known for their marine reserve. It houses some very unusual species.

3. Venus takes about 225 days to orbit the Sun. It's closer to the star than our planet.