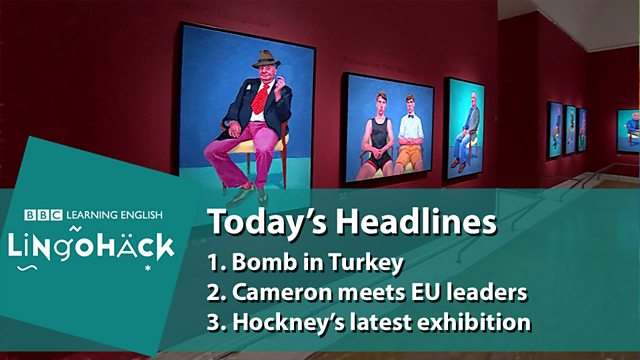 At least 36 people have been killed, almost another 150 injured, in a gun and bomb attack at the main international airport in Istanbul. Three gunmen are reported to have opened fire before blowing themselves up. Turkish officials say early indications suggest the Islamic State group was to blame. Turkey's President Erdogan says the attack was designed to create propaganda against his country using the blood and pain of innocent people. He's called on the international community to take a firm stand against terrorism.

European leaders have been meeting in Brussels, where they've urged Britain to set out its plans for leaving the European Union as soon as possible. The British Prime Minister David Cameron says he hopes his country will have the closest possible relationship with the union once it is outside the organisation. He has returned home, the other 27 leaders are continuing their meetings, discussing how to move forward.

One of Britain's most distinguished artists – David Hockney – presents a new series of portraits at the Royal Academy of Arts here in London this weekend. In it he captures friends, family and acquaintances.

1. Elderly people have been __________ to have the flu vaccine to protect themselves against the disease.

2. My university professor is a very __________writer. He's had three books published and won several awards.

1. Elderly people have been urged to have the flu vaccine to protect themselves against the disease.

3. In wartime, many governments use propaganda to persuade people to support the war.