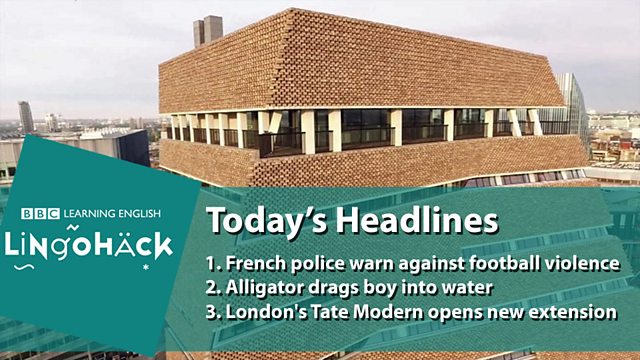 Authorities in France are on high alert in case of more violence between Russian and English supporters at the European Football Championship – about 65,000 English, Welsh and Russian supporters are expected to be in and around the northern city of Lille during the next few days. There were reports of minor disturbances there on Tuesday evening.

The search continues for a two-year-old child who was apparently dragged into a lagoon by an alligator as he and his family were paddling in the water in Florida. It happened near Disney's Grand Floridian Resort and Spa. Police say the little boy was dragged into the Seven Seas Lagoon on Tuesday evening.

It’s already the most visited modern art museum in the world. This week the Tate Modern in London will open a £260m extension that will greatly expand the range of work on show. The art collection will also be more diverse – many more countries will be displaying art work and it will also introduce visitors to some less familiar artists.

on high alert
prepared for a likely bad event

range
a group of things which are similar

2. My hairdresser offers a __________ of skincare treatments - from moisturisers to tightening serums.

1. 1. Signs have been put up in Trafalgar Square warning people not to paddle in the fountains.

2. My hairdresser offers a range of skincare treatments - from moisturisers to tightening serums.

3. France is on high alert as it hosts the Euro tournament, which started last Friday.