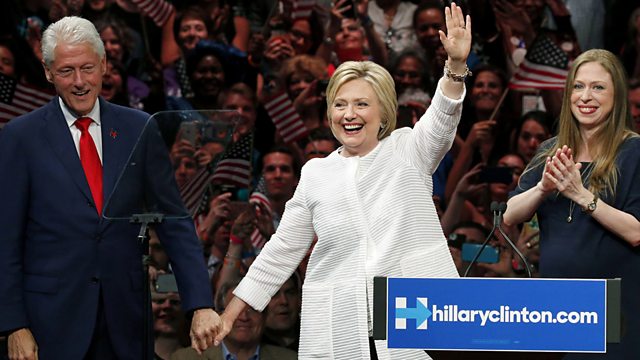 Surf's up in Australia

Hillary Clinton has claimed victory in the race to become the Democratic Party's candidate for the White House. President Obama has called to congratulate her on securing enough delegates to contest November's election. She'll be the first woman to run for president for any major political party in the US.

Chelsea and their former manager, Jose Mourinho, have reached a settlement with the former team doctor, Eva Carneiro. She claims she was forced to resign last season because she was demoted and said that she was victimised by Mr Mourinho. On Monday it emerged she'd turned down an earlier settlement offer of almost two million dollars.

Let's take a look at these spectacular pictures. They were taken off the east coast of Australia where recent deadly storms have created huge swells. Sixteen of the world's best surfers made the most of these conditions, tackling waves up to five metres high.

to contest
[here] attempt to win

swells
up and down movement of the waves

1. A huge sea ________ has led to safety warnings after waves of more than 13 metres high were recorded off the coast.

2. The man felt ________ after all his neighbours made complaints to police about his dogs.

1. Huge sea swell has led to safety warnings after waves of more than 13 metres high were recorded off the coast.

2. The man felt victimised after all his neighbours made complaints to police about his dogs.

3. The boxer announced he will contest the title of Word Champion next year.