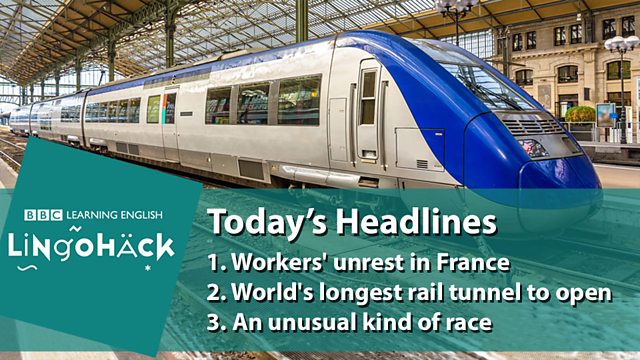 An unusual kind of race

Rail workers have gone on strike in France as nationwide protests continue over the government's plans to reform labour laws. President Hollande says he won't back down as a bitter stand-off with unions continues.

The world's largest railway tunnel opens in Switzerland on Wednesday after nearly two decades of construction. The Gotthard base tunnel, 57 kilometres long, will carry high-speed trains through the heart of the Alps.

The annual running of the Tetbury Wool Sack Races: Competitors have to climb Gumstool Hill carrying a sack of wool. The men are lifting 27 kilos – the women carry 16 kilos. They run 220 metres up the hill. Tetbury was once a thriving wool town, hence this - a way of showing one's strength.

the heart of
the middle or centre of

bitter standoff / the heart of / thriving

1. Having everybody at the meeting meant we could get to _________ the problem and do something about it.

3. Alleged tax corruption by the president has caused a _________ between the government and the business community.

1. Having everybody at the meeting meant we could get to the heart of the problem and do something about it.

2. We lived in a thriving village until they closed the school and post office.

3. Alleged tax corruption by the president has caused a bitter stand-off between the government and the business community.