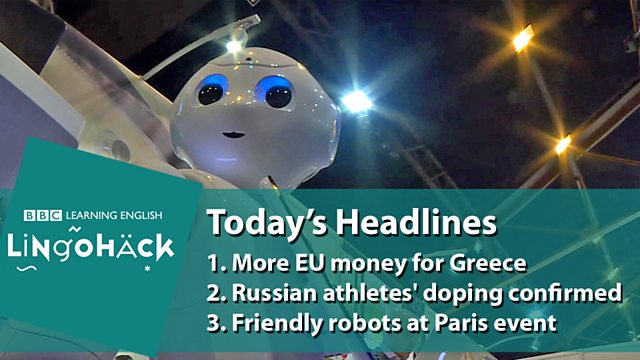 Eurozone finance ministers have agreed to unlock another $11.5bn worth of bailout funds to Greece. After marathon talks that ended in the early hours of this morning in Brussels it was also agreed to phase in debt relief in two years' time – a key demand of the Greek government and the International Monetary Fund. The 19 ministers said the deal had been made possible by Greece's continued economic reforms.

Fourteen Russian athletes have tested positive, now samples taken at the Beijing Olympics have been re-analysed. In just three weeks a decision is due on Russia's participation in the Rio games.  Athletes from 11 other countries have also now returned 'positives'. The IOC has said up to 31 athletes could be banned from Rio.

Now, we've tended to see robots as a threat, especially to jobs, as they become more and more capable, but at Europe's biggest robotics event all the talk is about something called 'a cobot'. The idea is that collaborative robots will work with humans rather than replace them.

samples
small parts of something to be studied by scientists

3. Terminally ill cancer patients are being asked to donate blood and tissue __________ to a study when they die.

1. Experience has shown that people are more collaborative if there is a big reward for them.

2. The company wouldn't have survived the economic crisis without extra bailout funds.

3. Terminally ill UK cancer patients are being asked to donate blood and tissue samples to a study when they die.