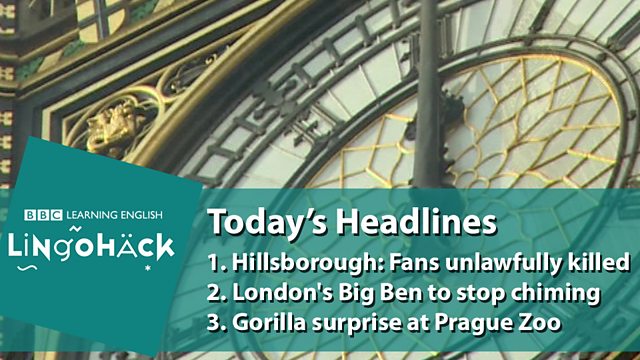 27 years after the Hillsborough football disaster, a jury has concluded that the 96 victims were unlawfully killed. The decisions follow the longest inquest in British legal history. South Yorkshire police admitted they had got the policing of the match "catastrophically wrong".

Here in London, the chimes of Big Ben are going to fall silent next year because the famous parliamentary clock tower – the Elizabeth Tower – needs essential repairs. This sound has chimed almost uninterrupted for about 150 years but it's only going to be reserved for special occasions. It's part of a project that's going to cost more than $US40m. The tower is going to be partially cladin scaffolding for about three years… the last significant repair work on Big Ben – that was more than 30 years ago.

Let's go to Prague Zoo, because visitors have had their first glimpse of this little baby gorilla. Her birth took everyone by surprise. Nobody had even noticed that her 24-year-old mum Shinda was pregnant. Shinda had already had a number of miscarriages – being a little overweight she wasn't expected to ever have a baby. The delivery went well. She and her new-born baby are said to be doing very well.

1. The strong winds caused the ________ to collapse, damaging cars on the street below.

1. The strong winds caused the scaffolding to collapse, damaging cars on the street below.

2. I was with my wife when she delivered our second child.

3. Millions of people fell silent to remember those who had died in war.

4. Crowds lined the streets of Windsor to catch a glimpse of the Queen on the eve of her 90th birthday.

5. The drought is having a catastrophic effect on farming in the region.