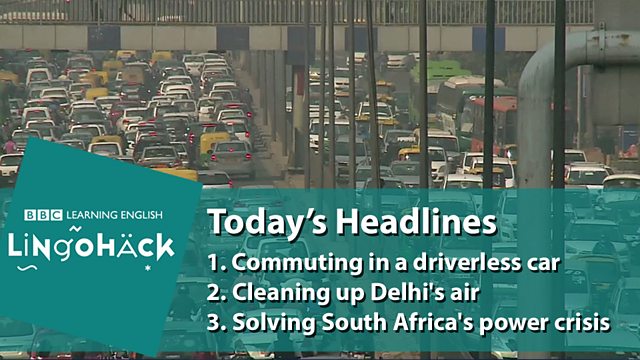 Commuting in a driverless car

The Swedish car maker, Volvo, is about to start recruiting 100 people to commute to work next year in driverless cars. They'll be asked to read a book, send texts and emails while behind the wheel.

It's morning rush-hour in Delhi. Cars slowly inching. A city that's slowly choking. Delhi's air is the worst in the world. It's 25 times more toxic than the safe levels set by the World Health Organisation and cars are responsible for nearly half of the most dangerous pollutants. Every week more than 3,000 new cars are added to the roads of this city. The government's been trying to restrict their use and has banned cars that are more than 15 years old.

Power from the sun. In South Africa's Northern Cape, sunshine is in abundance. Harnessing that power would seem to be a logical step towards solving part of the country's energy crisis. It's a crisis which is well documented – a strained grid, blackouts and now a price increase. As South Africa's predominantly coal-powered power plants strain to meet the demand, renewable energy is becoming more attractive.

driverless
not controlled by a person

choking
not able to breathe

1. Hundreds of fish were killed when _______ chemicals leaked into the river.

2. I was amazed to see that the new _______ trains were completely controlled by a computer.

1. Hundreds of fish were killed when toxic chemicals leaked into the river.

2. I was amazed to see that the new driverless trains were completely controlled by a computer.

3. The film was predominantly an action move but there was some romance in it too.

4. There was an abundance of wildlife when we went on safari in Kenya.

5. The smoke from the steam train choked us as we went through the tunnel.