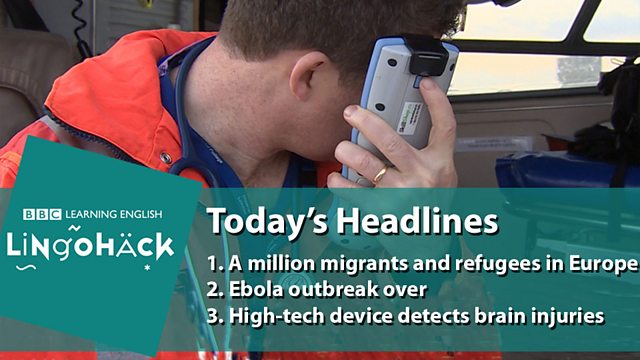 A million migrants and refugees in Europe

The United Nations says the total number of migrants and other refugees crossing by sea to Europe in 2015 has now reached over a million – with most of them arriving in Greece.

The World Health Organisation says the Ebola outbreak in Guinea is officially over, two years after it first emerged there. More than 11,000 people have died of the disease. Most of them have been in Guinea, Liberia and Sierra Leone. Health officials though still warning there could be sporadic outbreaks of Ebola.

A good news story now about a medical advance. London's air ambulance is trialling a handheld scanner - called the Infrascanner - that can detect potentially life-threatening brain injuries. The device can spot clots on the surface of the brain which, left untreated, could lead to disability or death.

crossing
moving from one side to the other

spot
notice something that is difficult to find or see

1. Only __________ fighting was reported elsewhere in the city, where government forces have been battling to halt a rebel offensive.

1. Only sporadic fighting was reported elsewhere in the city, where government forces have been battling to halt a rebel offensive.

2. John was considered a very good football coach. He was quick to spot young talent.

3. The archaeologist had to cross a dense jungle in search of the lost temple.