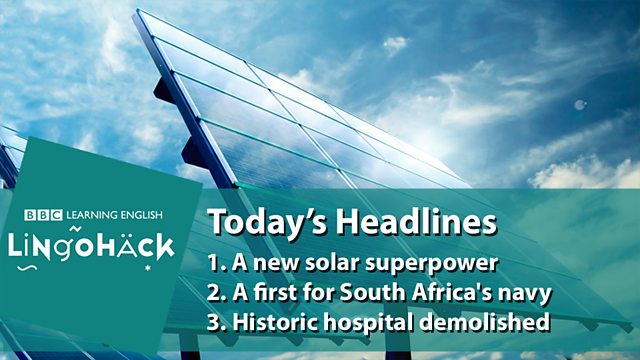 A first for South Africa's navy

The World Bank has confirmed that Morocco is about to become a solar superpower by opening the world's biggest solar plant. The plant on the edge of the Sahara will create electricity for a million homes using these giant mirrors to capture energy from the sun and to generate steam. But the really clever thing about this particular plant is that it can store energy to generate solar power even while it's dark.

Now let's take you to South Africa, and Zimasa Mabela has been on her first patrol after she became the first African woman to command a navy vessel. She broke new ground when she took charge of a de-mining ship based in Cape Town last month. The 38-year-old mum of two says she wants to be judged on her ability to command and not her gender.

And finally to Dallas, Texas, and a building which was a piece of the city's history… This, the first hospital in Dallas to perform a successful heart transplant. That was 1985. It didn't take long for that demolition to bring the building down. Apparently it would have been just too expensive to renovate it.

broke new ground
did something nobody has ever done before

to renovate
to improve its condition

1. An international team of scientists expects to __________ in their research to cure cancer.

1. An international team of scientists expects to break new ground in their research to cure cancer.

2. The town was in darkness after lightning struck the power plant.

3. The mayor set aside funds to renovate the old palace. He hopes it will increase tourism in the town.