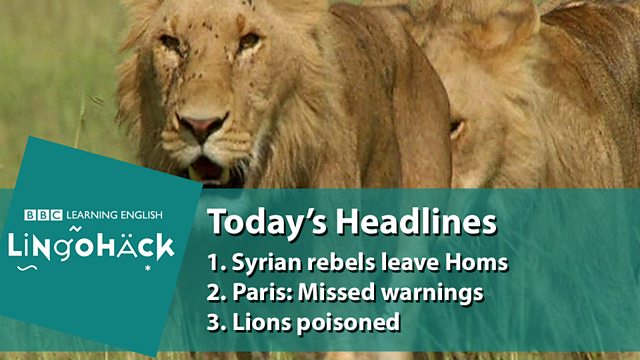 Syrian rebels have begun leaving the last areas they've been holding in the city of Homs. A local ceasefire agreed with the government is allowing them to leave. It's a deal which means that the entire city is now back in government hands.

An opportunity to arrest the suspected ringleader of last month's attacks in Paris may have been missed. Abdelhamid Abaaoud slipped through an international operation to capture him in January, while he was in the Greek capital, Athens.

Two Maasai farmers have been charged after allegations that they poisoned a famous pride of lions in Kenya. Eight lions from the Marsh Pride in the Maasai Mara National Reserve are being treated for poisoning. Two others have been found dead. It's thought that the lions had killed three of the farmers' cows.

ringleader
leader of a criminal group

allegations
statements that haven't been confirmed

1. Peter was suspended from work. There had been allegations of bullying in the company.

2. A ceasefire will give both sides the opportunity to negotiate.

3. It was a daring robbery. The ringleader was sentenced to ten years in prison.