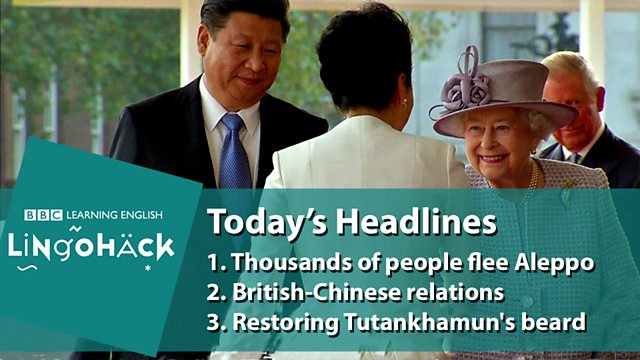 It's estimated 35,000 people have been displaced by an upsurge in fighting around the Syrian city of Aleppo. It's one of five areas where government forces have launched offensives since Russia began supporting their operations with airstrikes at the end of September.

In a speech at Buckingham Palace, Queen Elizabeth has described the emerging relationship between China and the UK as a global partnership. She said the state visit of China's president Xi Jinping, is a defining moment.

A year ago the beard of Tutankhamun in a museum in Cairo was accidently knocked off. It was then very hastily reattached amid much controversy. Well it's now confirmed that a team of experts is to remove the beard and reattach it more carefully. It could all take up to two months.

displaced
forced out of someone's or something's original position

2. People in the village were _______ after weeks of rain caused a terrible flood.

4. There was much ______ about plans to build a wind farm in an area of outstanding natural beauty.

1. The invention of the motor car was a defining moment for the future of people's mobility.

2. People in the village were displaced after weeks of rain caused a terrible flood.

3. It was a dangerous situation for everyone as the enemy army launched offensives on the city.

4. There was much controversy about plans to build a wind farm in an area of outstanding natural beauty.