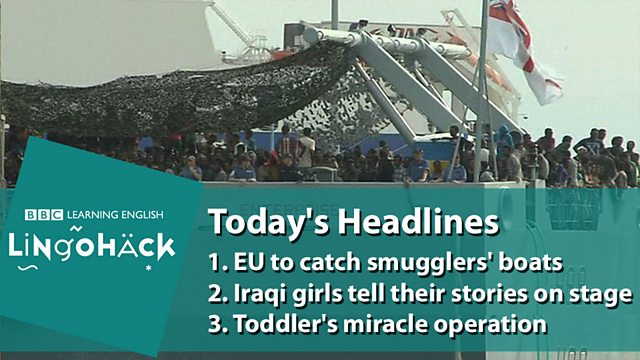 EU naval vessels will now be able to board and seize people smugglers' boats. So far this year more than 130,000 migrants and refugees have crossed to Europe from the North African coast. More than 2,700 have drowned.

On a stage in Baghdad a theatrical performance unlike any other. These girls aren't just playing a part, they're playing themselves. A play about orphans, performed by orphans – drama as a kind of therapy. Aged between 12 and 17, 15 actresses, all of them from an orphanage in Baghdad. Each has lost one or both parents. Many have been exposed to violence, trauma and upheaval.

To a toddler in Australia now, who has made what doctors are describing as a miraculous recovery after his head was internally decapitated in a car crash. This is 16-month-old Jackson Taylor whose neck was completely snapped in the accident although his muscle and skin kept his head in place. Surgeons were able to use part of one of his ribs to reattach his head to his spinal column and he's now fully mobile again and smiling.

miraculous
unexpected and difficult to believe

2. The custom officers at the airport ________ five suitcases with cocaine hidden in them.

1. I find going for long walks is good therapy for my depression.

2. The custom officers at the airport seized five suitcases with cocaine hidden in them.

3. Despite the late-night party, Mary had made a miraculous recovery by the morning.

4. I've been offered a new job in France but I'm not looking forward to the upheaval of moving again.