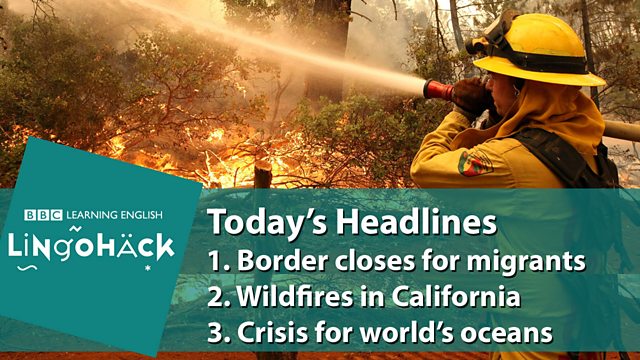 Large crowds of frustrated, exhausted people are spending the night at the Serbian border with Hungary, where Hungarian authorities have completed a new razor wire fence and closed off unofficial crossing points.

In California this is the sound of summer – they call it the 'valley fire' and no one here can remember anything like it. It has already consumed an area twice the size of San Francisco, and still it burns.

The ocean is on the brink of collapse, according to a WWF report released today. The study into the health and habitats of marine species has found that populations more or less halved between 1970 and 2012. The report says the declines may be steepest in the fish we need for the global food supply.

spending the night
staying or sleeping at a particular location

frustrated / spending the night / consumed / on the brink of

3. Scientists are _______ discovering a cure for certain types of cancer.

1. The huge tidal wave consumed much of the beach and the village behind it.

2. Since I've had kids, I find it so frustrating that I can't go out to the pub any more.

3. Scientists are on the brink of discovering a cure for certain types of cancer.

4. Because we missed our connecting flight, we had to spend the night at the airport.