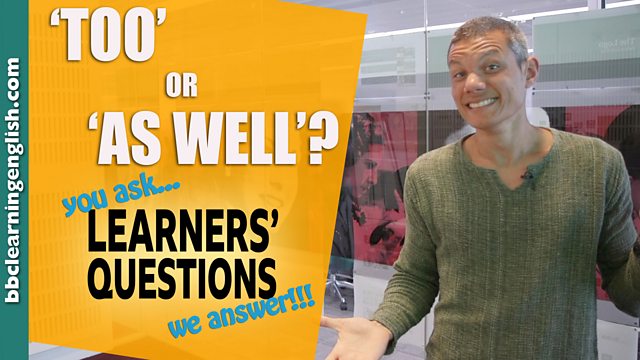 What's the difference between 'too' and 'as well'? - Ruben

Both too and as  well can be used to mean 'also'. But what can as well do that too can't?

Too - more than needed
Too is an adverb that sits in front of other adjectives and adverbs. It means 'more than needed' or 'more than necessary' in a negative way i.e. having this much is a bad thing. We can modify too using words like 'a little', 'somewhat' or 'much'.

Too - quantity
We can use too + noun to talk about a quantity or how much of something there is. We use too + much / many / little / few. The meaning is still negative.

Too - consequences
We can use too + an infinitive verb to talk about the consequences of something being 'more than needed'.

Too - also
Too can mean 'also' or 'in addition'. When used this way, it usually goes at the end of a clause or sentence. In this way, too is often used in short answers.

As well - also
As well is an adverbial phrase that means 'in addition' or 'also'. It usually goes at the end of a clause or sentence. We can also include a further noun with as well by using the preposition as: as well + as + another noun.

As well - other uses 1
As well can also be used with 'might' and 'may' to produce might as well and may as well. These mean that something is 'probably worth doing because nothing else is happening'.

As well - other uses 2
We can combine as well with 'just' to make just as well. This means 'it's probably a good thing given the circumstances'.

As  well can be followed by the preposition 'as' to include a futher noun. Too cannot.