The people Vs Big business 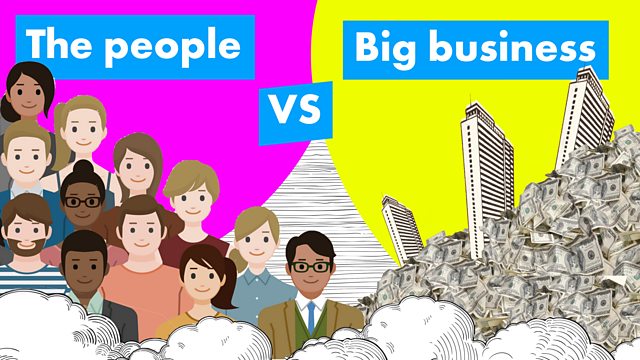 Tim
Multinational corporations can be huge – even richer than some countries.

We'll show you how ordinary people have taken on massive corporations, using the power of the law.

The longest running libel case in British legal history: the two friends who took on the might of McDonald's...

Cancelled flights: the reason you can now get your money back in Europe...

You might have heard of McLibel, the longest running libel case in history in England.

It said McDonald's encouraged litter, was cruel to animals and its workers, and destroyed the rainforests. But McDonald's fought back, demanding that the activists apologise or go to court... which they did.

Well, the British judge said McDonald's were right and ordered Helen and David to pay £60,000 damages, which was later reduced to £40,000, but the case didn't end there. The activists went to the European Court of Human Rights in Strasbourg, taking action against the UK government this time.

They said, because they did not have access to legal aid, they didn't have a fair trial.

The court in Strasbourg agreed and also said their right to freedom of speech had not been protected. The UK government was ordered to pay £57,000!

So, to find out more about why this case went to an international court, let's speak to one of the lawyers involved – Mark Stephens.

So, what we were doing was publicly pointing out that there had been problems with the trial because they had not had legal representation, which they should have done.

Tim
As Mark says, David and Helen didn't have a fair trial in the UK, so they were able to take a new case to the European Court. So, what helped Helen and David?

Mark Stephens
I think one of the things about McLibel, which isn't properly understood, is the sort of David and Goliath element, in the sense that Steel and Morris didn't have the benefit of lawyers. And so the judge gave them very great latitude in the asking of their questions, the framing of their questions and the way in which they were able to comment.

And as a result, they were able to get things into the case, which a team of lawyers would have just been prevented from doing, and that played to their real advantage. And I think there's another issue as well, which is that Steel and Morris were indigent: they were smart, but they had no money. They had nothing to lose; they had no house to lose.

Other people, who were also in the group, settled out early with McDonald's, because they didn't want to lose their homes.

Tim
Mark says Helen and David had nothing to lose, and that was an advantage. Ultimately, should big companies be allowed to sue individuals?

Mark Stephens
One of the real benefits for society, and a great outcome from this case, is that the law has been amended so that companies can't sue for libel, because libel is about an individual's hurt feelings and of course a company doesn't have feelings.

Of course, you know, directors and officers of a company can sue for libel, but not a company any more. So, this case couldn't be brought in the modern era, following these law reforms as a result of the McLibel case.

Tim
Companies now can't do this: this case resulted in UK law being changed so companies can't sue for libel.

So, Mark Stephens showed us that not only can individuals take on these massive companies in court, they can sometimes even change the law to help other individuals in future.

If you've ever had a flight cancelled, you might have been able to claim compensation.

And that could be because of one woman.

Friederike Wallentin-Hermann's flight was cancelled because the plane broke down.

The airline, Alitalia, said this was an 'exceptional circumstance' – something very unusual and unpredictable – so they wouldn't refund customers the money they'd lost.

Friederike took this case to court, where a judge said that engine failure should be expected.

The case went to higher European courts, but they said the same thing.

Friederike got her money back and now all European customers are entitled to refunds for cancelled flights because of mechanical problems.

Let's speak to aviation lawyer Tony Payne about the impact one small case can have.

And, by application therefore, what you can see is one poor decision can have a floodgate effect. And while this might only be £250, these sorts of claims, almost in a class action likeness, can end up being a very, very significant cost for an airline

Tim
That shows that one person taking a company to court and winning can make it more likely for others to win too. Will multinationals always win in court because they have more money than an individual?

Tony Payne
While it might be the perception that the airlines have bottomless amounts of money, that certainly is not the case: they run very, very tight margins, which allows consumers like you and I to purchase airline tickets at very low cost. So, they are in fact... can be losing a very significant amount of money when these cases go against them.

Tim
What Tony's saying is that airlines aren't as rich as they seem and don't have unlimited money, so they can be in real danger when a lot of people take them on in court. So, can one case change the law?

Tony Payne
Well, it's the basis on which the law is... law is modified. So, the law is made by... by Parliament, or by the European Commission in this case, or the European Parliament, and the law will be modified as the courts look to interpret the way in which that law has been created.

So, it does happen every day of the week: you know, the courts are in session all of the time at different levels and the... that... those statutes – that law is being interpreted.

So, it is something that is happening very, very regularly. In the aviation context, you might see something like this every six months – that there is, sort of, significant new law coming about, but I can tell you that, you know, there are hundreds and hundreds of these claims on for... sometimes for any one airline at any one time. So, it's a... it's a significant likelihood that you are seeing these things happen.

Tim
This means that although parliaments or other bodies make the laws, action by small people in court can and does have a real effect in changing how the law is interpreted in court cases.

That case might have left us wondering why Alitalia decided to go to court not once, but twice!

Tony explained that people can have a real impact on big companies. Often lots of people make the same complaint. He also showed that the way the law is used is changed and updated by people like you going to court.