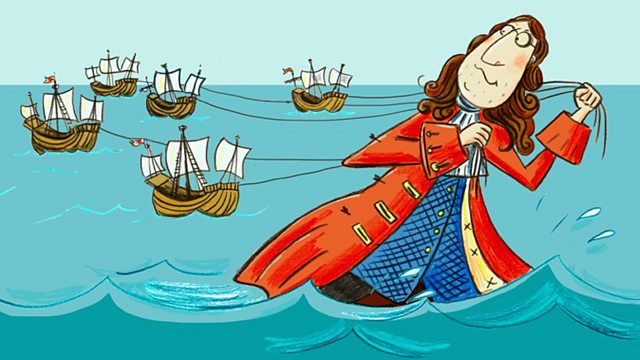 Boy
Not a ghost. A… a… giant! He's huge… he's coming this way… walking through the waves!

Gulliver narrator
Yes. I, Gulliver, was crossing the stretch of water between Lilliput and the island of Blefuscu, half swimming, half wading, carrying ropes and iron hooks.

I had a plan to save Lilliput from invasion by the islanders of Blefuscu – it was dangerous, but I had made a promise to the king in return for my freedom.

Skyresh, the chief admiral and my enemy, brought me the news.

Skyresh
The King has agreed to set you free.

Skyresh
Against my advice, mind you… And there is a price.

Gulliver
Oh… What is that?

Skyresh
I have the contract written here: "Conditions to be promised by the Man-Mountain in return for his freedom. One: He shall not leave Lilliput without permission… Two: When a messenger has to travel a long way, they may ask…

"Finally, he shall help us in our war against Blefuscu."

Flimnap
Blefuscu. The kingdom of Blefuscu lies to the north-east of ours. Its inhabitants are our deadly enemies. At this very moment their navy is preparing to invade us.

Gulliver
What are you fighting over? Land? Religion?

Skyresh
Yes, here on Lilliput, we believe that eggs should be cracked at the small end. This is because our King's grandfather cut his finger when breaking an egg at the big end. But over in Blefuscu they crack their eggs at the big end. It's an outrage and an insult. Those so-called Big-Endians across the sea are our enemies now.

Gulliver narrator
This seemed the strangest of reasons to go to war, and yet… in my own country there had been stranger causes of wars.

Skyresh
Before we unlock your chain, you must promise to obey these rules.

Gulliver narrator
I had no choice.

Gulliver
I, Lemuel Gulliver do solemnly swear to defend the state of Lilliput and do all I can to destroy the Blefuscu navy.

Skyresh
One more thing: if you break any of the conditions in the contract, the consequences will be serious. We'll be watching you.

Gulliver narrator
And so at last, I was free from my chains and could walk about the island as I wished.

I went to the coast to see how I could escape from Lilliput. But all I could see were miles and miles of ocean. But in the distance there was one small, rocky island – Blefuscu!

They were getting ready to attack Lilliput. It was time to honour my promise to defend the island. A bold plan appeared in my mind…

Gulliver
Flimnap, I need some of your strongest rope and your heaviest iron bars.

Flimnap
That is a strange request.

Gulliver
You will see… Trust me. I have a plan. I can save Lilliput.

Gulliver
You're a good woman and a true friend, Flimnap.

Gulliver narrator
I twisted three ropes together into one, so it was like thick cord. I bent the iron bars into hooks and fixed them on the ends of the cords. With these, I strode into the sea. I swam for half an hour, and then, when the Blefuscu harbour came into view, I waded with the ropes behind me…

When the Blefuscu sailors saw me, they were so frightened, they leapt from the ships and swam to shore. There were about 30,000 of them.

I fixed one of my iron hooks to each empty ship. When the people on the shore realised what I was doing, they fired arrows at me.

But I remembered my glasses and put them on to protect my eyes. I then pulled the ships away…

Crowds were waiting for me at Lilliput harbour as I brought the entire Blefuscu fleet with me there.

They called me a hero. The king was delighted and wanted me to help him attack Blefuscu. But I told him that I had promised to defend Lilliput, not to invade Blefuscu and make its people slaves. I persuaded him that it was better to live in peace.

Soon afterwards, something happened that was to change my life in Lilliput completely. It started in the middle of the night…

Crowds
Fire! Fire! Help! The palace is on fire!

abandon ship!
something sailors shout when they have to leave their ship in an emergency

invasion
attack with the aim of controlling a place

admiral
high-ranking officer in the navy

inhabitants
people who live in a particular place