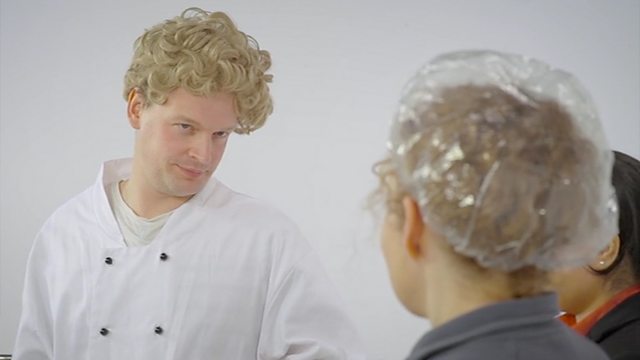 Mary
It's quiet without Gordon today.

Ceilia
It's nice isn't it! He said he was going for a fitting but I'm not sure what for though. Ahh, here he comes now.

Ceilia
Keep your hair on! Don't forget we've got some students coming in for lunch today so none of your old-fashioned dishes… give them something contemporary – modern.

Gordon
Leave it to me. I'm down with the kids.

Mary
You've got it covered?!

Gordon
Yes I have… oh I see, you're referring to this… my new toupee… my wig. I'm just keeping up with the fashion.

Mary
And what fashion is that then?

Gordon
A new hair style – these are all the rage – the women love it.

Mary
After a fashion.

Ceilia
I thought that wigs were a bit… old hat. And if you are going to cook in that, then wear it under this hat, for now

Ceilia
You're being a fashion victim – we liked the old you.

Gordon
Well you're stuck with the new me now. Just leave me to cook!

Mary
Ooops, looks like you've made a fashion faux pas…

Ceilia
… there appears to be hair in the soup!

Peter
Hair in the soup? Keep your voice down… everyone will want one.

old-fashioned
not modern or fashionable

all the rage
very popular

after a fashion
only to some extent