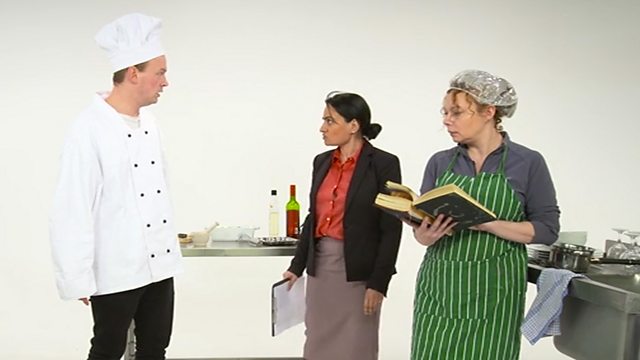 Ceilia
Well according to my calculations, in the past two months we've only had 22 customers. I'm not sure we can afford to stay in business.

Gordon
Well you gave it your best shot but maybe it's time to say enough is enough – and give up. No doubt I'll get a new job at some high-class restaurant.

Ceilia
Oh be quiet Gordon and let me think.

Gordon
I knew she couldn't cope. She calls herself a business woman but really I'm the brains behind this business.

Mary
Really?! Actually, I think she's a tough cookie – and she doesn't strike me as the sort of person to give up easily.

Gordon
Ha! Don't forget I used to be married to her. You might seem as tough as old boots but she wouldn't say boo to a goose. She's as soft as a little kitten…

Ceilia
Excuse me… you're the one who cried all the way through the royal wedding on TV! Believe me Gordon, I'm a game old bird and I've decided to make some changes.

Ceilia
Right. Well firstly, I think we ought to extend the menu and offer more choices.

Ceilia
Well maybe for you… perhaps we ought to think about staffing then?

Mary
And what is the second point Ceilia?

Ceilia
Well secondly, I think we ought to open earlier and try to get more customers in for lunchtime.

Ceilia
Well tough luck Gordon. You might think that I'm as gentle as a kitten but I'm as hard as nails and believe me I'm not going to give up on this business yet. So go on, think of something new for the menu.

she wouldn't say boo to a goose
timid, quiet and shy

a game old bird
a tough and smart woman

tough luck
without sympathy for your situation

tough love
sort your own problems out