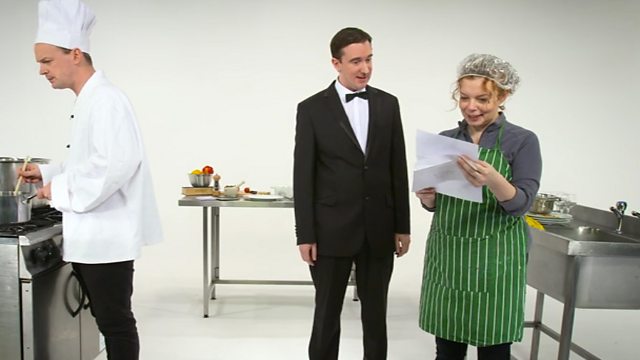 Peter
Table two weren't too keen on the soup. Ooh, what's that? A letter from a secret admirer?

Mary
no. Nothing like that – it's my exam results…

Peter
Oh well done Mary – Doctor Marigold - another feather in your cap. You're so clever.

Gordon
What's that? You've qualified to be a 'doctor'. Well done… although personally I think the world needs more chefs than doctors – everybody needs to eat. But well done… you've had a lucky break.

Peter
Yes, you're going to be a real success, maybe you'll be my doctor…

Gordon
Of course, I know all about success. I've got a track record for creating world-class food and winning numerous awards – just ask Ceilia.

Mary
So what's the secret to your success Gordon?

Gordon
Well… errr… an appreciation for food… an eye for detail… and an excellent relationship with the customers.

Peter
Are you sure?

Gordon
Yes! Now I want you to take this to table two… it's one of my best recipes… it's always a roaring success.

Gordon
Don't worry Mary. I can taste success. You wouldn't find a doctor making something like this.

Peter
Well, they're certainly eating it.

Gordon
There you see… that's why I'm top dog in this kitchen.

Peter
Oh no! One of the customers is lying on the floor being sick. I think he's got food poisoning!

Gordon
Oh typical! Well come on then, you're a doctor.

Mary
A Doctor of Philosophy, Gordon. But I'll see what I can do as per usual.

feather in your cap
an achievement to feel pleased about

a lucky break
a piece of good luck / a good opportunity

a track record
a reputation based on performance or experience

taste success
get a feeling of what success is like

top dog
best or most important person in a group