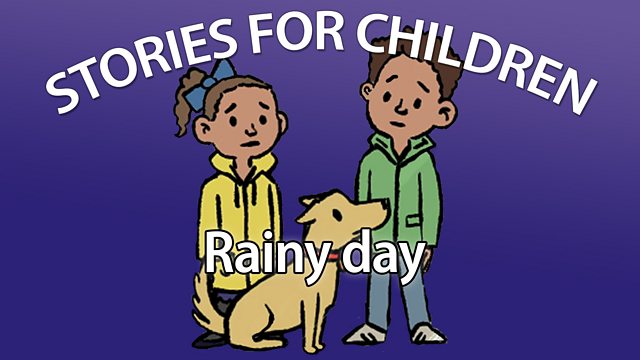 One weekend, Mum had to work a shift at the hospital, and Dad had loads of marking to do, which meant that neither of them had time to look after Joe and Bella.

But Joe and Bella didn't mind. They were going to spend the weekend with Gran, and Gran had promised to take them to the beach!

There was just one problem. When they woke up on Saturday morning, and looked out of the window, the rain was sheeting down!

Bella pressed her nose against the glass and said hopefully, “We can still go, can't we?”

But when Gran arrived to collect them, it was still pouring, and Gran said they would just have to spend the day at her house instead.

It rained and rained. They watched a movie on TV, and when they stopped it was still raining.

They tried taking Gran's dog, Selby, for a walk, but when they opened the door, Selby took one look, whined, and ran back inside again!

Eventually, Gran went off to do some housework. Joe decided to do more homework. He had tests coming up at school and Mum and Dad were always on at him to work harder. But Bella was too little to worry about tests.

“There's nothing we can do about it,” said Joe. “You'll just have to make the best of it.”

Bella stomped off. Joe wasn't paying much attention to her, he was too busy with his maths.

After a while, though, he noticed a banging and thumping from the kitchen. What was Bella up to?

He got up and looked round the door. Bella was mixing something in a huge mixing bowl.

“It's a lovely cake,” said Bella happily. “But you can't have any.”

“That's a relief,” said Joe. “Because it looks terrible. And it smells worse!”

The cake mixture had all kinds of lumps in it and the smell was like no cake that Joe had ever smelled before!

“It's not for humans,” said Bella. “It's for dogs. I've made it specially for Selby, because he couldn't go for his walk.”

Joe was feeling queasy just thinking about it.

When Bella put it down on the floor for him to eat (raw, because she said it would taste better that way), Selby took one sniff and then ran out of the room!

Gran came running into the kitchen. “Oh dear, what is the matter, Bella?” she asked.

“It's raining,” Bella howled. “It's never going to stop! We can't go to the beach! And now Selby doesn't like my cake!”

Joe didn't say anything, but he knew how Bella felt. It was turning into a horrible day.

“Now then,” said Gran. “Things aren't that bad. Why don't we do something to cheer ourselves up?”

“How about we make a cake as a surprise for your parents? A cake for humans, not for dogs? After all, they've been working hard all day.”

“Can we eat some too?” asked Bella.

“Of course you can,” said Gran.

“And can it be chocolate sponge?” asked Joe.

“It certainly can,” said Gran.

They had a lovely time making the cake. And when they had finished decorating it, they suddenly realised that it wasn't raining any more. They had been so busy they hadn't even noticed.

“Quick, let's get out while the sun's shining!” said Gran.

They took Selby down to the park, and when they got back, Mum and Dad had arrived. Everybody was just ready for a slice of cake!