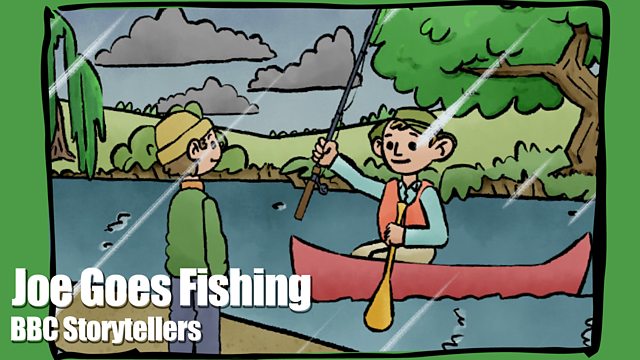 Joe sat on his bed and looked at his birthday presents. They were great! Smart new trainers from his mum. A fishing rod from his dad. And best of all, his grandpa had given him a watch. A proper, grown-up watch with a black leather strap and a silver face.

Joe said nothing. He just gazed at the watch. It was so beautiful. Lying there, in its dark blue velvet box, it looked like a moon.

‘Look after it, Joe,’ said his mother. ‘It was expensive.’

Joe nodded. ‘I will, Mum. I promise. Thank you, Grandpa.’

That was last night - Saturday. Now it was Sunday, and Joe was going fishing.

‘Are you wearing them to go fishing?’
Joe’s mum pointed at his new trainers. ‘It’s been raining all night, Joe. The river bank will be muddy. Wear your old boots.’

‘No, it’s my birthday weekend,’ said Joe. ‘I want to wear my new things. It will be okay. The rain has stopped now.’

He quickly pulled on his jacket and left the house. ‘Bye!’

Joe was going on his own. His family lived in a quiet village. The river was just two minutes away from the house. He would be quite safe.

Joe went down the lane and through a gate. He walked along a thin path to the riverbank. He knew a perfect place to fish. It was flat, like a little beach. He could stand really close to the water.

Soon he was there.

The beach was empty. The only thing there was a huge white swan. It was out of the water.

The swan hissed at Joe. Its long neck came towards him like an angry snake. ‘HSSSSS!’

The swan stamped its feet angrily, and then walked into the water and sailed away.

Joe was glad to see it go. Swans could be dangerous. They were very strong and their beaks were sharp. He didn’t want to share the beach with one.

Joe began to fish. He hooked a worm onto the end of his fishing line and cast it out. It landed in the water, in exactly the right place. Joe grinned. What a wonderful fishing rod!

An hour went by. Joe ate his sandwiches. He whistled. He fished. He was happy. But the sky was getting dark. The clouds were thick and grey. Rain! It began to fall. It was hard and heavy.

The rain didn’t go away. It rained even harder.

Another hour went by. The rain didn’t stop. Joe was wet through, but he wouldn’t go home. It was his special day, and he was going to stay.

He put a fresh worm on his fishing line and cast it out. But his hands were wet and the fishing rod was slippy. The rod flew out of his hands and landed with a splash in the river.

He had to get it. It wasn’t far away. He could easily reach it if he went to the water’s edge.

Joe ran forward. But the beach had turned muddy. Very muddy! His smart new trainers were ruined in an instant. Then one of them came off completely. It was stuck in the mud behind him.

No! Joe tried to turn around to pick it up but he lost his balance.

‘Whoa!’ He fell slap on his back in the mud - and his smart new watch flew off his wrist and landed in the river.

He stared down into the water but he couldn’t see it. And then he saw his fishing rod had gone! The river had carried it away.

‘This could not be any worse!’ he wailed.

Then he saw the swan.

It was coming back, still angry. Joe moved to safety, still holding his trainer in his hand.

The swan began to feed. It dipped its head under the water and pulled at the weed. Its head came out again.

The swan dipped its head under the water, grabbed the silver thing in its beak and brought it out of the water.

Huh? It wasn’t a fish! The swan threw it away angrily.

And Joe saw his beautiful watch land safely on the riverbank. He ran to it and picked it up. It was still working. YES! Joe did a happy dance, right there on the beach.

‘Hey buddy! Have you lost this?

On the river, there was a man in a canoe - and he was holding Joe’s fishing rod!

‘I found it five minutes ago,’ said the man. ‘I’m guessing it’s yours?’ He pulled in to the riverbank and handed it to Joe. ‘It’s a beautiful rod.’

The man smiled and paddled away.