"Never before had I seen such a wonder" is an example of adverbial inversion. But what does this term mean, and how and why do we use it? Find out with Dan's help in the programme.

1) I had never seen such a wonder.

2) Never had I seen such a wonder.

Why do you think they are different? Well, Dan's our man as usual as he attempts to explain the principle of inversion in only 90 seconds! Can he do it? If anyone can, Dan can. 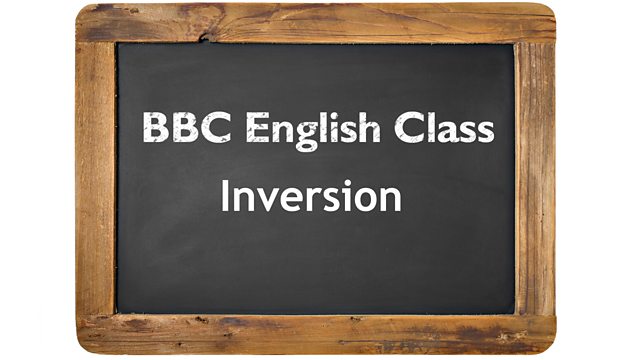 Hi guys. Dan from BBC learning English here. This week we're going to be studying inversion after negative or limiting adverbs. Sounds confusing, doesn't it? But don't worry, it's actually really, really simple. We can explain the whole thing in only 90 seconds, as usual. Are you ready? Here we go.

Now, have you ever been to The Grand Canyon?

I have. It was the most spectacular thing I've ever seen. Seriously. Never had I seen such a wonder.

Never had I seen is an example of inversion. Not sure what I'm talking about? Come here and let me show you.

This is done for formailty, for drama or for emphasis. Would you like another example? Come over here.

I hardly ever smoke.

This sentence is in the present simple. The same is true as we did before. We move the adverbial phrase to the beginning of the sentence, and then we have to add the auxiliary verb before we switch the subject and the auxiliary.

Hardly ever do I smoke.

There are lots of other adverbials, and you can find information about this and everything that I've talked about on our website at www.bbclearningenglish.com.

I'm out of time guys, I have to go. Dan from BBC Learning English signing off.

We use inversion to increase the level of:

To do this we put the adverb or adverbial phrase to the beginning of the sentence, then switch the positions of the subject and the main verb, like this:

Normal word order: I had never seen such a wonder.

Using inversion: Never had I seen such a wonder.

When we want to use inversion with sentences that have no auxiliary, we need to add it after the adverb and before the subject in the inverted sentence.

Using inversion: Rarely do I smoke. (added do after adverb)

Feeling ready to test your ability to use inversion? Try it in our quiz.

I had never tasted such incredible food.

Help
such
in
do
did
food
tasted
never
had
I
incredible
Well done.
Sorry, that's not right. The sentence with normal word order is: I had never tasted such incredible food. Try again.
cmFyZWx5IGRvIHRoZXkgbG9zZQ==

Help
lose
has
does
rarely
do
they
Well done. That's right.
Sorry, that's not right. The sentence with normal word order would be: They rarely lose. Can you work out the inverted sentence?
c2VsZG9tIGRvIEkgZWF0IG1lYXQ=

That's it for English Class. How was it for you? Never have you had such an enjoyable lesson...

Join us for News Review as we discuss a major story in the news, and the language you need to understand it.