Vocabulary: 8 uses of 'round'

Sit back and enjoy the story of Pygmalion - and learn 8 different uses of the word 'round'.

Pygmalion has fallen in love with a statue!

What's the point of having an ivory statue to love?
How do you think the story will end?

A) Aphrodite becomes jealous of the statue and destroys it
B) The statue turns into a real woman, but Pygmalion realises he preferred her when she was a statue
C) Pygmalion doesn't care that he is in love with a statue - he marries her anyway
D) Something else

Watch the video and find out which option is correct. And listen out for four more uses of round. 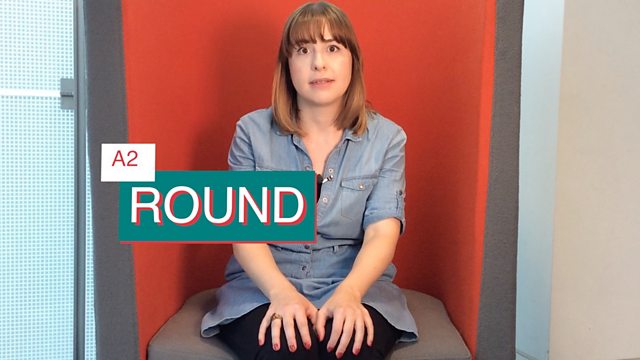 Lizzie
Hi again, I'm Lizzie. Let's continue our story about a sculptor called Pygmalion who has made a statue of what he thinks is his perfect woman.

Although he knows she is only made of ivory, he throws his arms round her and he buys her gifts too and then he lays her on his bed.

Anyway, he then goes round to a festival that is taking place in the village to worship goddess Aphrodite. He prays to her that his statue will come to life. Aphrodite goes to see this statue and is flattered to find that it almost looks like her – in a roundabout kind of way.

Back at the festival, Pygmalion comes round to the idea that perhaps his ivory statue will never love him back but all of a sudden flames from a fire jump out at him and he takes this as a sign that maybe his prayers have been answered. With all his energy, he sprints back to his house and smothers his statue with kisses – and guess what? She's alive – her skin is smooth and warm and her lips are soft and very kissable. Pygmalion has found his perfect woman and he calls her Galatea.

It's a strange kind of love story but it ends happily. Pygmalion gives thanks to Aphrodite. And just to round off the story, you might like to know that later he marries his ivory girlfriend and they have two children – real ones of course.

I hope you enjoyed that story and I'll see you for another one soon.

So, the correct answer is D) Something else. The statue does become a real woman, but Pygmalion loves her and they get married and have children - real ones!

Now lets practise the different uses of round. Have a go at this quiz.

SSB1c2VkIHRvIGhhdGUgdGhlIHRob3VnaHQgb2YgbGl2aW5nIGluIExvbmRvbiwgYnV0IEkgdGhpbmsgSSdtIGNvbWluZyZuYnNwO3JvdW5kIHRvIHRoZSBpZGVhIC0gaXQncyBub3Qgc3VjaCBhIGJhZCBwbGFjZSE=
I used to hate the thought of living in London, but I think I'm {{}} to the idea - it's not such a bad place!

You need an expression that means 'begin to accept something previously rejected'.

Help
I used to hate the thought of living in London, but I think I'm
select
to the idea - it's not such a bad place!
Excellent!
Sorry, you need an expression that means 'begin to accept something previously rejected'. - and this isn't it.
SW4gYSByb3VuZGFib3V0Jm5ic3A7d2F5LCBoZSB0b2xkIG1lIHRoYXQgaGUgZGlkbid0IHdhbnQgdG8gZ28gb3V0IHdpdGggbWUgYW55bW9yZS4=
In a {{}}, he told me that he didn't want to go out with me anymore.

You need an expression that means 'sort of'.

Help
In a
select
, he told me that he didn't want to go out with me anymore.
Well done!
Sorry, you need an expression that means 'sort of' - and this isn't it!
SSBjYW4ndCB3YWl0IHVudGlsIG15IGtpZHMgZ28gYmFjayB0byBzY2hvb2wgLSB0aGV5IGFyZSBkcml2aW5nJm5ic3A7bWUmbmJzcDthcm91bmQmbmJzcDt0aGUmbmJzcDtiZW5kLg==
I can't wait until my kids go back to school - they are {{}}.

You need a phrase that means 'making me annoyed'.

Help
I can't wait until my kids go back to school - they are
select
.
Well done!
Sorry - you need a phrase that means 'making me annoyed' - and this isn't it!
SSdtIGdvaW5nJm5ic3A7cm91bmQmbmJzcDt0byBteSBtdW0ncyBhIGJpdCBsYXRlciwgc28gSSdsbCBhc2sgaWYgc2hlJ3MgZ290IGFueSBlZ2dzIHdlIGNhbiBib3Jyb3cu
I'm {{}} my mum's a bit later, so I'll ask if she's got any eggs we can borrow.

You need a phrase that means 'visiting'.

Help
I'm
select
my mum's a bit later, so I'll ask if she's got any eggs we can borrow.
Good job!
You need a phrase that means 'visiting' - and this isn't it!
SXQncyBiZWVuIHN1Y2ggYSBwZXJmZWN0IGRheSAtIGxldCdzIGhhdmUgYSBiYXJiZWN1ZSB0byByb3VuZCZuYnNwO2l0Jm5ic3A7b2ZmLg==
It's been such a perfect day - let's have a barbecue to {{}}.

You need a phrase that means 'complete something'.

Help
It's been such a perfect day - let's have a barbecue to
select
.
Well done!
Sorry - you need a phrase that means 'complete something' - but this isn't it!
RG9uJ3Qgd29ycnksIHlvdSdyZSBzYWZlLiBXZSd2ZSBhcnJhbmdlZCBwb2xpY2UgcHJvdGVjdGlvbiByb3VuZCZuYnNwO3RoZSZuYnNwO2Nsb2NrLg==
Don't worry, you're safe. We've arranged police protection {{}}.

You need a phrase that means 'all day and all night'.

We asked you to tell us a story using as many of the phrases with round as possible:

He works round the clock for weeks in order to finish the project. I support him very much in his ambition to promote his career, but our family lives comes to naught. I wish he spent more time with me.  I value common meals preparing our favourite dishes such as Paella, salmon and pumpkin soup. We haven’t gone round to concerts, museums and exhibitions for a while as we used to go. What I miss most is dancing Waltzer with him going round and round. What fun is it! Furthermore, we haven’t been to our favourite restaurant just round the corner.

One day, when he happened to get home from work in time, which is a real sensation, I addressed this to him. In the beginning I spoke to him in a low voice, in a roundabout way. He was just nodding. Unfortunately, I was just beating around the bush. I had to emphasise on what was gnawing at me. I pointed out that he’s really getting wound up by that imminent promotion. I don’t want to get him a workaholic. What’s the use of it if you have no time to spend with your lovables? Eventually, he comes round to the insight that he has to slow down. He really did in the weeks ahead. To round off, things got better, but at times he still gets immersed into work. But I do not resent him it that much as before. ‘The great virtues make a person admirable, the little weaknesses make him lovable’, an idiom goes. This is true for him.

In Paris, last month, I went  round to the « Place de l'Etoile » , the cars were moving  round and round the roundabout, round the clock.  A lot of noise and pollution were driving me around the bend.  Despite,  I went to the  « Arc de triomphe » and  took up the staircases.
On the summit,  I was abble to  see round all over Paris.
The scenery was so amazing  I came round the noisy and stinking trafic. In a round about kind of way, I'll come back to this place in the future.

My 14-year-old son was driving me round the bend because his hyperactivity. He is energetic round the clock . His mother said that he looks like the cartoon character  " Flash " in a roundabout kind of way  . Sheasks him to go for running round the house everynight  which helps him to sleep well . We tried to convince him to  attend  a gym topractice some type of sport , but he used to refuse .  Anyway, with my insistence , he comes round so we go round to ( Judo house) which is a gym where he can learn and practice " Judo " .

To make an estimation the trainer asked him to play a round with one player of the team .

The two players hold each other and go round and round but out of the blue my son beat his advanced adversary . And just to round off the story, the instructor decided that my son is talented and he hope to see him in the coming Olympiad.

In a roundabout kind of way she fired me. She called me at the end of the working day. I am still not sure about what this meant for her, as she used to stay in the office round the clock. As a matter of fact, it was very late. She told me that I should come round that the small town in the middle of nowhere was an agreeable place. I heard horrible stories about other managers transferred there. Clients were driving them around the bend. I did not want even to go round to that place. I could not stand that woman anymore. I resigned and to round off I told her all the bad things I had wished to say a long time before.

Last week I decided to go round to a new supermarket I had never been before. I had been driving my car for a while when I realized I was keeping going round and round. This situation was driving me around the bend, so I came round to ask for information. In a roundabout kind of way a passer-by explained to me how to arrive there. Unfortunately, when I rounded my journey off, I discovered that the new supermarket was closed because it wasn’t a round the clock open one. So I couldn’t help but come back home miserably.

Well, in my opinion the end of the Pigmalion´s story is a bit annoying, so, I´m going to continue in a different way... The sculptor travels round his country to try to forget his loved statue... till he goes round to a huge and famous vulcano. He looks at the stones made of lava. His mind thinks round and round, then, he realizes he could become a statue made of lava too. He comes back to the edge of the vulcano with the beautiful statue of Galatea. After a ceremony, in a roundabout kind of way a wedding, they both fall (in love) at the bottom of the vulcano.

That's the end of Session 4. In session 5, Tim from the Learning English team is back with the latest epsisode of our new pronunciation series. Don't miss it!