Shakespeare wrote the plays… but we made the videos! Take a look at the creative process in our special video as we meet the team of producers, actors and animators who made it happen.

How did we make the Shakespeare Speaks series? It's time to take a closer look at the creative process. We hear from Series Producer Catherine Chapman and Animation Producer Martin Kerem in this video as they talk about the videos and the work that goes into making them.

As you watch, listen out for what Catherine's top directing tip: what is the "number one thing" that needs to be in the programmes? 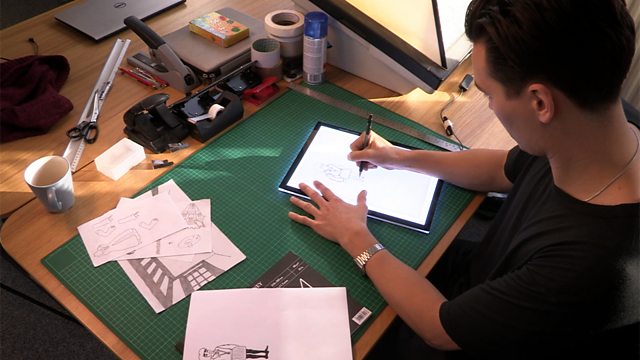 From BBC Learning English and The Open University: A brand new series…

ANIMATION CLIP
Thomas, can you stop that banging?! I'm trying to write here!
My dear daughter. Sit with me, while I work.
Ohh, I do like that line…

CATHERINE CHAPMAN, SERIES PRODUCER
Shakespeare Speaks is aimed at people who are learning English as a second language and we're bringing them idioms, words and phrases and expressions that come from Shakespeare but they really bring your English to life.

ANIMATION CLIP
Your Majesty, it is a great honour to perform The Merchant of Venice for you a second time.

The series explores the people, places and events in Shakespeare's life. Hear about his plays…

ANIMATION CLIP
William Shakespeare's play The Tempest, full of music, magic and monsters, is being performed for the first time.

ANIMATION CLIP
And who is this fellow in the jester's costume?
Your Majesty, that is Trinculo.

And his original language...

ANIMATION CLIP
The King's name is a tower of strength, which they upon the adverse party want.

ANIMATION CLIP
Alex Ferguson was like a father to me. He was a tower of strength.

See how they have evolved over time…

ANIMATION CLIP
The word glisters is often changed to glistens, or glitters.

And hear them as they are used in a modern context…

ANIMATION CLIP
Well, that car looks fantastic, but all that glitters is not gold. Check the engine before you buy it.

CATHERINE CHAPMAN, SERIES PRODUCER
When we're recording Shakespeare Speaks we have about six actors. Myself and my colleagues are in the adjoining studio directing and recording.

STUDIO RECORDING CLIP
Mandy, can you do some crying and a big sniff please?

CATHERINE CHAPMAN, SERIES PRODUCER
We have a couple of runthroughs to get the character and the meaning and what we're trying to convey both in terms of getting it an enjoyable, interesting listen and also making sure we have got the language and the explanation really spot on.

STUDIO RECORDING CLIP
Now, have we got everything?
Here he comes now: quick, get down.

CATHERINE CHAPMAN, SERIES PRODUCER
When I am in the studio working with the actors, the number one thing I'm looking for is life. It's got to have that life and energy behind it because that's what makes people listen and what makes people stay listening. Once you have got the interest, then you get the engagement and the learning.

With the radio programmes finished, it’s over to the animation team.

MARTIN KEREM, ANIMATOR
The characters are all drawn by hand: Ollie spends a crazy amount of time drawing each character and each object and prop that needs to go into every scene. We then start building the animation and moving the still drawings around. So to enable us to do that, his hand-drawn pictures needs to be scanned and then tweaked and photoshopped to make them look right for the style and then we bring that into an edit suite and we then make them move.

The Shakespeare Speaks website and social media experience gives learners an opportunity to discover and enjoy the language of Shakespeare in a way that suits them.

CATHERINE CHAPMAN, SERIES PRODUCER
For me, one of the delightful things about making the series was realising that there are so many phrases that you use every day that you didn't know were Shakespeare. We could go on for ever, there are so many words and phrases that we can bring to the audience, series after series. We now have all these characters: ready and waiting to do more fabulous Shakespeare stuff to bring different areas of his work to today's audience.

ANIMATION CLIP
Come on Thomas, close the door behind you… Hmm, yes: perhaps you should put another couple of nails in that door before we go, Thomas…

Ahh. To nail or not to nail: that is the question.

Shakespeare Speaks, from BBC Learning English and The Open University.

What is Catherine's "number one thing"?

"Life". Catherine says the programmes need "life and energy" because they're what make people listen. When people are interested, you get the "engagement and learning" that is necessary for an educational programme to be successful.

Learn more about Shakespeare with The Open University.

Meet the cast and crew.