Music, magic and monsters! We learn how to use the phrase strange bedfellows from The Tempest - and lots of other useful expressions for talking about relationships.

The cat sleeps with the chickens??
Cats don't normally sleep with chickens - do they?! William Shakespeare's in for a shock, and there are plenty more bizarre partnerships in this episode - maybe the storm's making people a bit crazy!

As you watch the video, see how many unusual pairings you can find... 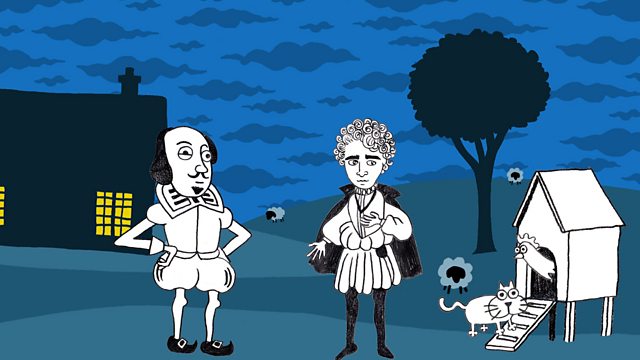 Narrator
It's late in the evening. William Shakespeare is visiting his actor friend Robert Harley.

Robert
Will! Just one moment… I have to rescue the cat. It likes to sleep with the chickens and it gets locked in the henhouse… come on kitty…

Will
The cat sleeps with the chickens? That's unusual.

Robert Harley
It's strange, but they seem quite happy together. So, Will, I've read your new play The Tempest and I'm very excited about all the magic, the music and the monsters, and my character, Trinculo, the lost traveller: it's a wonderful part. His meeting with Caliban: it's very interesting.

Will
Ah, yes, Caliban. Neither man nor fish – a weird sort of creature.

Robert Harley
You put them both in a storm…

Will
Yes: it's an old trick but it's a good way to bring them together. Trinculo needs shelter and the strange, well, almost monstrous Caliban is wearing a gaberdine: a large coat, big enough for both of them. Trinculo gets under it, safe and warm from the storm.

Robert Harley as Trinculo
Alas, the storm is come again! My best way is to creep under his gaberdine; there is no other shelter hereabouts: misery acquaints a man with strange bedfellows.

Will
Ohh, I do like that line: Misery acquaints a man with strange bed-fellows. When times are hard, people do things they don't normally do…

Narrator
We'll leave them there for now. Shakespeare lived in a time of discovery – strange new lands and creatures, so the mysterious island of The Tempest appealed to Shakespeare's audience as both exciting and scary. These days, the phrase strange bedfellows describes two people or groups that are connected in a particular activity, even though they are very different and are not usually seen together. It's often used for political alliances. For example, a July 2015 report from US broadcaster Fox News described Israel and Hamas as strange bedfellows when they both wanted to stop the growth of so-called Islamic State in Gaza. The headline was:

Clip 1
Israel, Hamas strange bedfellows when it comes to reining in ISIS in Gaza.

Narrator
Strange bedfellows is useful for all sorts of unlikely partnerships.

Clip 2
You think Miley Cyrus and Michael Bublé should write a song together? Well, they'd be strange bedfellows… but it might just work.

Robert Harley
Now Will, it's getting late and there's a storm coming. You must stay with us tonight. You can sleep in the henhouse – or you can share a bed with the Harley family.

Will
Hmmm… To bed or not to bed: that is the question.

There are lots of unusual partnerships in this episode, for example: the cat sleeps with the chickens, Caliban and Trinculo share a coat, Miley Cyrus and Michael Bublé do a duet! How many did you find?

The phrase strange bedfellows appears in Shakespeare's play, The Tempest. Did you know that the word tempest means violent storm?

Have a go at this quiz to see how much you learnt about The Tempest. Watch the episode again first if you like.

How is Caliban described?

Help
The Tempest is about magic, music and ______.
a monkeys U29ycnksIHRoZXJlIGFyZSBubyBtb25rZXlzIGluIFRoZSBUZW1wZXN0Lg==
b mad men U2hha2VzcGVhcmUncyBwbGF5cyBhcmUgZnVsbCBvZiBtYWQgY2hhcmFjdGVycywgYnV0IFRoZSBUZW1wZXN0IGlzIGFib3V0IG1hZ2ljLCBtdXNpYyBhbmQgbW9uc3RlcnMu
c monsters V2VsbCBkb25lLCBSb2JlcnQgSGFybGV5IGlzIHZlcnkgZXhjaXRlZCBhYm91dCBhbGwgdGhlIG1hZ2ljLCB0aGUgbXVzaWMgYW5kIHRoZSBtb25zdGVycyE=

Will says: 'Ah, yes, Caliban. Neither man nor fish – a weird sort of creature'.

Help
Caliban looks like a cross between a man and ______.
a a fish V2VsbCBkb25lISBDYWxpYmFuIGxvb2tzIGxpa2UgY3Jvc3MgYmV0d2VlbiBhIG1hbiBhbmQgYSBmaXNoLg==
b a cat U29ycnksIENhbGliYW4gbG9va3MgbGlrZSBjcm9zcyBiZXR3ZWVuIGEgbWFuIGFuZCBhIGZpc2gu
c a whale U29ycnksIENhbGliYW4gbG9va3MgbGlrZSBjcm9zcyBiZXR3ZWVuIGEgbWFuIGFuZCBhIGZpc2gu

Will explains what a 'gaberdine' is.

We are told: Trinculo gets under the coat to stay safe and warm from the storm.

Help
Trinculo gets under Caliban's gaberdine to protect him from ______.
a the weather V2VsbCBkb25lIC0gVHJpbmN1bG8gbmVlZHMgdG8gc2hlbHRlciBmcm9tIHRoZSBzdG9ybS4=
b monsters U29ycnksIFRyaW5jdWxvIG5lZWRzIHRvIHNoZWx0ZXIgZnJvbSB0aGUgc3Rvcm0u
c strangers U29ycnksIFRyaW5jdWxvIG5lZWRzIHRvIHNoZWx0ZXIgZnJvbSB0aGUgc3Rvcm0u

Will says: Ohh, I do like that line: Misery acquaints a man with strange bed-fellows. When times are hard, people do things they don't normally do…

How did you do?

4-5 correct - Well done, you can sleep in the Harley house!
0-3 correct - Oh dear! You'll have to sleep with the chickens!

We think you and BBC Learning English are well-suited, so stick with us! Next we'll explore the meaning and use of strange bedfellows - and bring you some more common phrases about relationships!