The Queen is taking King James' wine away, but is she being cruel... or kind? Learn how to use the phrase cruel to be kind and expand your vocabulary by learning six synonyms of cruel - and the nouns that go with them.

To listen or not to listen, that is the question

King James also has an important question to answer - should he listen to his wife when she tells him to stop drinking wine?

While you watch this video, answer this question: why is the Queen taking away King James' wine? Is she being unkind? (The answer's under the video – no looking!). 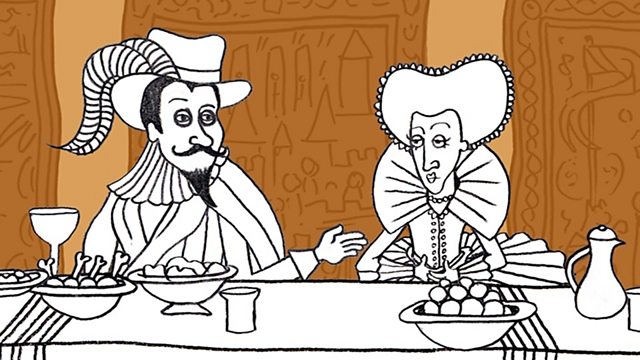 Narrator
It was a windy November day. William Shakespeare is at the palace of King James I. He's having dinner with the King and Queen.

The Queen
Now dear, you know you mustn't drink too much wine. The doctor says it's bad for your health!

King James
No wine?! Madam, you are very cruel to me. Don't you agree, Mr Shakespeare?

Will
Your Majesty, the Queen is being cruel, only to be kind, like my character Hamlet, the Prince of Denmark.

King James
Does Hamlet take away the King's wine?

Will
No, no, your Majesty: Hamlet says cruel and terrible things to his mother, the Queen. He's angry because she married his uncle Claudius, very soon after his father's death. Hamlet suspects that his mother, or his uncle, or both of them, killed his father, so that they could marry each other.

King James
Well! No wonder he's saying cruel things. But how is he going to be kind, I wonder? Go on, go on…

Will
Your Majesty. Hamlet tells his mother that he said these cruel and terrible things to shock her into realising that this marriage is wrong – it's a sin. But he says she can begin to make up for the sin and be a better person if she leaves her new husband. That's why he says 'I must be cruel, only to be kind'.

Robert Harley as Hamlet
So, again, good night.
I must be cruel, only to be kind:
Thus bad begins and worse remains behind.
One word more, good lady.

Narrator
We'll leave them there for now. Shakespeare's audiences loved the violence and powerful emotions in his revenge tragedies. But Hamlet is not your typical revenge character. He's a thinker who becomes a man of action. In modern English, Shakespeare's phrase is usually shortened to I must be cruel to be kind. Or just cruel to be kind. People say it when they do something unkind that will actually benefit someone. It's the title of a song in the American movie 10 Things I Hate About You.

Clip 2
I know I upset her when I told her to get a haircut, but it was such a mess: I had to be cruel to be kind.

Will
I'm afraid not, your Majesty.

The Queen
She should have listened to him.

King James
Quite right, quite right.

The Queen
And you should listen to me dear. No more wine!

King James
Hmmm. To listen or not to listen, that is the question.

Answer
The Queen isn't being unkind: she is taking King James' wine away because the doctor says that it's bad for his health. But do you think the King will do what his wife suggests?

We hope you were listening carefully to this video. Answer these questions about the video to find out how well you listened.

To listen or not to listen

Will tells us that Hamlet is "angry because she married his uncle Claudius, very soon after his father's death." Does 'his uncle' refer to Hamlet's uncle or Hamlet's father's uncle?

If you 'suspect' someone, you think that they might have done something.

Help
Hamlet is certain that his mother and his uncle, Claudius, killed his father.
a True U29ycnksIEhhbWxldCBzdXNwZWN0cyB0aGF0IGhpcyBtb3RoZXIgYW5kIENsYXVkaXVzIGtpbGxlZCBoaXMgZmF0aGVyIC0gYnV0IGhlIGRvZXNuJ3Qga25vdyBmb3IgY2VydGFpbi4gWW91J2xsIGhhdmUgdG8gd2F0Y2ggdGhlIHBsYXkgdG8gZmluZCBvdXQh
b False V2VsbCBkb25lLCBIYW1sZXQgc3VzcGVjdHMgdGhhdCBoaXMgbW90aGVyIGFuZCBDbGF1ZGl1cyBraWxsZWQgaGlzIGZhdGhlciAtIGJ1dCBoZSBkb2Vzbid0IGtub3cgZm9yIGNlcnRhaW4uIFlvdSdsbCBoYXZlIHRvIHdhdGNoIHRoZSBwbGF5IHRvIGZpbmQgb3V0IQ==

Is he being cruel, or cruel to be kind?

Help
Why does Hamlet say horrible things to his mother?
a Because he wants her to be a better person V2VsbCBkb25lLCBIYW1sZXQgaG9wZXMgdGhhdCBpZiBoZSBtYWtlcyBoaXMgbW90aGVyIHJlYWxpc2UgdGhhdCBoZXIgbWFycmlhZ2UgaXMgd3JvbmcsIHNoZSB3aWxsIGxlYXZlIGhlciBuZXcgaHVzYmFuZCBhbmQgYmVjb21lIGEgYmV0dGVyIHBlcnNvbi4=
b Because he hates her U29ycnksIEhhbWxldCBob3BlcyB0aGF0IGlmIGhlIG1ha2VzIGhpcyBtb3RoZXIgcmVhbGlzZSB0aGF0IGhlciBtYXJyaWFnZSBpcyB3cm9uZywgc2hlIHdpbGwgbGVhdmUgaGVyIG5ldyBodXNiYW5kIGFuZCBiZWNvbWUgYSBiZXR0ZXIgcGVyc29uLg==

In English, we can use the verb 'listen' to talk about following advice. What does Will say when King James asks if Hamlet's mother followed Hamlet's advice?

How did you do?
3-4 correct - congratulations, you were listening well - unlike King James!
0-2 correct - oh dear, maybe you need to listen to this episode again...

The song cruel to be kind is in a Hollywood movie called 10 Thing I Hate About You, but do you know which Shakespeare play this movie is based on? (clue: it’s not Hamlet!)

Click ‘Next activity' to find out and to learn more about the phrase cruel to be kind.